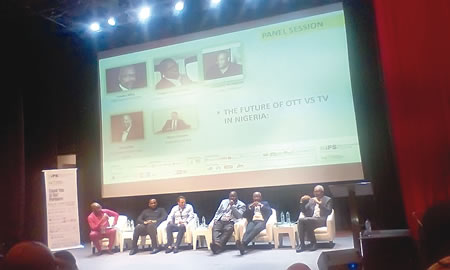 Nollywood, no doubt, is the face of the Nigerian Film Industry, a belief that makes one easily assume the players smile to the bank with six digit account balances and enjoying the limelight and razzmatazz it brings.

However, whereas this is the case for some, majority are crying in penury, licking their wounds in pains.

The film industry is very much awash with mistrust among the players. And trust and accountability are the bedrock of every successful entity, enterprise, be it in business, public governance and personal relationships.

Unfortunately, when these are lacking, mistrust, disobedience and fraudulent practices become the order of the day.

This truth came to limelight at the recent 2019 Nigerian International Film Summit held in Lagos.

The summit took place during the annual American Film Market and packaged to enable business driven conversations on the bourgeoning film industry in Nigeria. It was for all those involved already or interested in the business of film in Nigeria.

Also in attendance were players with latest technology in film making, dubbing, audio-visual esthetics and animation.

They converged at the summit to X-ray the challenges in the industry, the latest technologies and opportunities inherent in the internet and digital devices.

The summit provided the venue for the players to tell each other basic home truth bedevilling the industry and to chart a way forward.

To correct this anomaly, the issue of trust, accountability and funding was put in the front burner.

According to Mr Efefiong Akpan, a Screen Writer and Broadcast Producer, there are crisis of trust in the Nigeria film industry.

“For Nollywood to grow very fast, it has to imbibe certain culture as well as speak the language of film by following the rules of the game, rules guiding the film industry all over the world.

“Some people in the industry have refused to speak the language of film which is visual and audio grammar, at times you see a nice story that disobey this grammar,’’ he said.

Akpan said that Nollywood needs to understand how the industry operates in other countries and standardise its practices, adding that the players should also learn to pay writers for jobs done.

“At times, you finish a job for a producer and instead of paying, he starts giving excuses, whereas he has the money,’’ he said.

Mr Femi Ogunsanwo, Film Producer and owner, House Gabriel, said that after having not earned enough for his films from distributors and exhibitors, he had to find a home for himself.

“I have to visit some countries and strike a deal directly with distributors and exhibitor houses. We had contracts signed and each party is keeping his own part of the contract.

“This keeps me thinking, why will producers pay about 95 per cent, taking all the risk to ensure their films get recognition and make more Box Office revenue in Nigeria,’’ he said.

Ogunsanwo said that even when you sign a contract for 50-50 per cent deal with cinema houses, the returns to producers kept reducing every week in spite of good Box Office records.

He said that he would prefer a situation when a producer invested N10 million for the release and airing in Cinema, he got the N10 million before the distributors and cinema houses take their 10 per cent and 15 per cent.

Mr Uzodinma Okpechi, a film maker, producer and owner of Primary Film and TV Productions, said that film making was a process.

According to him, it is the reason it has been digitalised and democratised to give power to the people.

“Do not take what you have to the Cinema if the quality is not for the cinema, there are other forms to recoup your investment,’’ he said.

Uzodinma noted that the Nigerian film industry was still developing, adding that it was the mindset that would move it forward.

He said the primary thing for film makers should be the quality attached to film project, in terms of getting the lighting, visuals and audio right.

Mrs Peace Anyiam-Osigwe, Founder, Africa Movie Academy Awards (AMAA), said that distributors and exhibitors were not sincere to producers, wondering why things that worked in other countries did not work in Nigeria.

“Producers are not happy with this development. Out of the 50 films being distributed, 48 of them incur losses as presently being marketed in Nigeria and there are no good stories to tell about the losses.

“There are many issues when producers pay upfront to market their films and cannot recoup their investment.

“Exhibitors should be honest and truthful and tell producers straight if they feel the film should not go to the cinema. Producers should also look at other ways of distribution beyond the cinema and stop concentrating all their efforts in Lagos,’’ she said.

Aniyam-Osigwe said there was the need for producers to put premium on the content for cinema release so that they have the ground to bargain.

Mr Opeyemi Ajayi, Executive Vice-President, Genesis Delux Cinemas, said there was need to understand the role of each of the player in the film industry value chain.

According to him, cinema is not a loss business as perceived by the producer because of the Box Office return issues.

“Filmmakers want to tell a story, they have beautiful ideas but the exhibitors have to air what the customer wants to pay for.

“Not all films are meant for cinema, so, from the scratch, producers should determine if the film is for cinema release and have strategies to address expectations of cinema audience,’’ he said.

Ajayi, however, said that producers should not rely on covering the entire cost of production from cinema alone.

Mr Moses Babatope, the Group Executive Director, FilmOne Distribution, said that film makers and producers should know where they were coming from, adding that distributors had made great breakthrough these three and half years.

According to him, film marketing has been rejuvenated with almost four to five Nollywood films released in 30 countries.

“Structuring the medium of distributing films have a lot of data as well as back to back successes in cinemas wherever our films are shown.

“We have recorded the largest acquisition of 34 Nigerian films with NetFlix and shown in major airlines.

“Majority of the films like ‘The Wedding Party’ and ‘Big Daddy’ are productions of collaborations and we need more of these collaborations to make Nollywood the next frontier.

“Marketing of films require having the right prints and from the exhibition perspective, it is what the customer wants to pay for,’’ he said.

Babatope said that knowing the cinema and the technical quality were the bane of most Nollywood films, noting that both sides should see cinema releases as events which required a great deal of party.

According to him, film making needs a great deal of dedication and commitment in terms of having the film six months before cinema release and we do not have this going in the industry, now.

“Good films are never ready on time for exhibitors to make decisions on. Basically, you watch films that could have spent sometime in the editing room,’’ he said.

Babatope, however, said that film distribution was in transition as there were many platforms available now.

Mr Patrick Lee, President, Cinema Exhibitors Association of Nigeria (CEAN), said that exhibitors were at the end of the market in the film production value chain.

“We are seriously working on this and hope that with technology, quality of films, numbers of screens, audience and attendance increases, the complaint of late and no payment will reduce,’’ he said.

Lee said that there was no penalty for members found wanting in this yet, adding that it has not been standardised by the Censors Board.

He said that the Association would continue to advise its members to do the right thing.

Ms Ijeoma Onah, the Founder, Nigerian International Summit, said the players would continue with the conversation to the satisfaction of each player within the film industry value chain.

She said that they would continue to create platforms for people in the industry to network and work together with colleagues in and outside the country.

From the foregoing, it is evident that the film industry in Nigeria will be enhanced and be better projected to the world if the mutual distrust and lacking of accountability is eschewed by the players in the industry.

It is pertinent to enthrone trust and instil better ways the actors in the value chain of the industry can work together for the overall good of the country’s economy.

“You are ungrateful”, Mercy Eke’s fans blast her