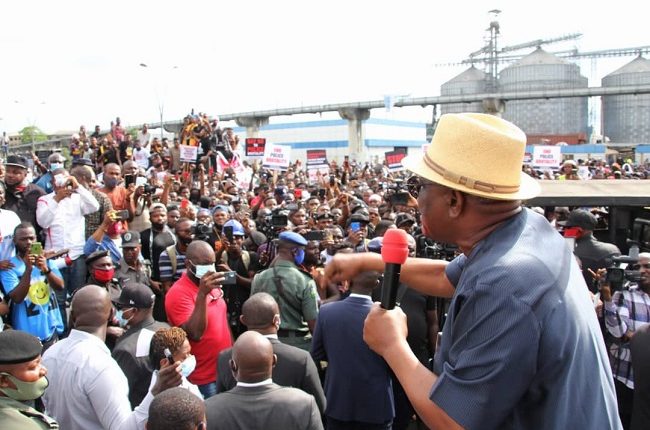 Governor of Rivers State, Nyesom Wike, on Tuesday, told youths at the #EndSARS rally in Port Harcourt that no state in Nigeria can match Rivers in the evil of the dissolved Special Anti-Armed Robbery Squad (SARS).

He added that he was not moved to encourage the raging wave of #EndSARS protest across the country because nobody listened or supported Rivers State when he raised his voice against perceived atrocities of the police unit in the state.

The governor had earlier warned the protesters against the rally in Rivers State had to address defiant protesters led by Rivers born entertainment stars and social activists who matched to the gates of the Government House, Port Harcourt.

The Rivers rally was rebranded from #EndSARS to end to overall police brutality, better welfare to policemen and justice for Rivers victims of police extrajudicial killings following the Inspector General of Police disbandment of the Special Anti Robbery Squad (SARS) call for

Addressing them, Wike said; “All of you here supported us to be here. I took an oath to protect lives and property. Every Rivers man or woman’s blood matters to me. What we find in this country is that nobody wants to say the truth.

As one of the states in this country, when we in Rivers raise alarm in this country, nobody wants to listen. But when it happens in other states, you want me to listen, I won’t do that. No Governor is this country has challenged SARS as Rivers State Government did.

“No state has suffered in the hands of SARS like Rivers. I am the only Governor who has come out to openly fight against SARS, that said they must scrap this SARS. No other Governor, not one came out.

“We have lost so many lives in this state in the hands of SARS. I cried and cried about SARS, not one state-supported Rivers. Now, same SARS has gone to kill people in another state, it has now touched them. Now that they have killed your own people in another state, they have seen how bad SARS is, you now expect me to come to support you to seek protection, not so. Rivers blood is very important to me.

“Rivers will never play second fiddle to anyone else. Look at a lecturer in the Polytechnic Bori that SARS killed in cold-blooded murder. We cried and cried, everyone saw it. Who in this country ever said let us protest about it?

“Nobody joined us in protest, because Rivers blood is not important. SARS can never be my friend. I will never support SARS. No Government in this country has challenged the police the way my government has.

“All the governors coming now to begin to join you in shouting we are ending SARS, why didn’t they say end SARS for so long? I will not be a party to playing to the gallery. It is not only about ending SARS, every Nigerian should support total reforms for the police.

“If you harp on SARS, which they have ended, are they not the same police personnel? If they form another body, is it not the same police? What is required is a total reform of the police. That I will always support. So all governors playing to the gallery joining end SARS, I won’t join.

“I don’t want that kind of popularity. I will do what is right at the right time. I raised the alarm, shouted when it mattered most. Now they have killed their own person, let them know how painful it is. Celebrities saying all kinds of things in social media doesn’t bother me.

“I will do what is right at all times. Nigerian needs a reform of the Nigeria Police. Now what we should do, as the President has said he would reform the police, let us hold the President by his words.”

UPDATE: Resign if you have honour, Akeredolu tells deputy