No room for Wike, Fayose in PDP again —Sheriff •We’ll fight to the end —PDP govs 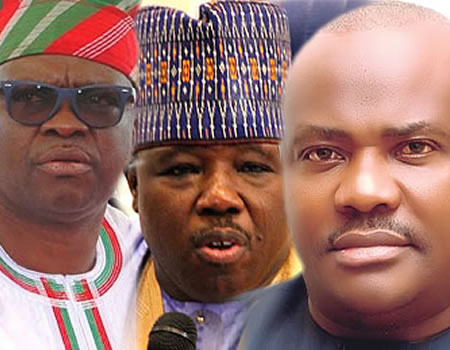 Also reacting to the judgment, its apparent beneficiary, Senator Sheriff, vowed to put in place a machinery that would not give room to people like Governors Nyesom Wike and Ayodele Fayose of Rivers and Ekiti states, respectively in any future arrangement in the party.

“I will engineer a restructuring of PDP such that characters like Wike and Fayose cannot find a way through  to attain any position of prominence in our party in the future. They have brought shame and agony through the application of their crude and godless politics which is at variance with the principles upon which our founding fathers built our great party.

“We must find a way to sieve things so that only men of character and integrity can come through for positions of responsibility at all levels of our political engagement in the country.

“We must urgently steer the ship of PDP clear of the path of infamy which Wike and Fayose has brought our party, making Nigerians to mistaken PDP as a training ground for thugs. That is the urgent task we have. We cannot continue to advertise thug brand and expect Nigerians to take us seriously,” he said.

In his own reaction, a former PDP deputy national chairman, Chief Olabode George, expressed shock, saying Friday, when the judgment was delivered, was “a bad day for democracy and an attempt to kill the opposition”.

Meanwhile, the PDP Governors’ Forum has rejected the Court of Appeal judgment that reinstated Senator Sheriff as the national chairman of the party and vowed to see the battle to the end.

While the forum said it would challenge the decision of the appellate court at the Supreme Court, the PDP BoT announced that the party organ would meet next Tuesday to brainstorm over the crisis rocking the party.

Describing the judgment as a rape on the nation’s democracy, chairman of the PDP Governors’ Forum, Governor Ayodele Fayose of Ekiti State, while addressing newsmen in Abuja hinted that the party would be heading for the Supreme Court to challenge the judgment.

Fayose, while describing the judgment as an action against the will of the people said, “If the people truly symbolise what a party is, then the machinations of our detractors and the anti-democratic organs will not prevail at last.

“We commend the minority judgment of the court and we believe truth will prevail. Thank God we have another opportunity to seek justice at the Supreme Court, which I believe will not be delayed or denied.

“The party will appeal the judgment as we believe in the ability of the judiciary to do justice. However, we plead with our members, leaders and supporters to calm down as we keep hope alive.

“If this is a price to pay, to keep our democracy alive and opposition strengthened, we are prepared to go the whole hog. The party organs will meet shortly to take concrete steps and decisions on the way forward,” he said.

Appeal Court judgment: No cause for alarm —Ekweremadu

Judgment on Makarfi, an attempt to kill opposition —Bode George