No rift between Makinde and I ― Oyo deputy governor 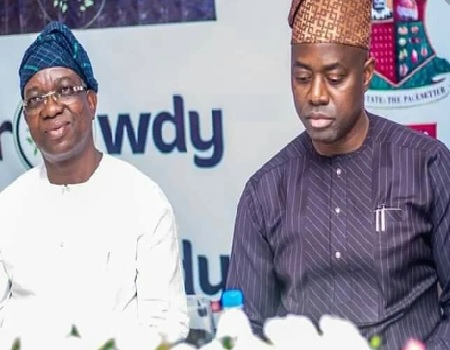 Contrary to speculation of a cold war between him and his boss, Oyo State Deputy Governor, Raufu Olaniyan, has said there is no rift whatsoever.

Olaniyan described the relationship between him and Governor Seyi Makinde as “robust and cordial.”

He spoke in Ibadan during a news conference at his residence in celebration of Eid-il-Fitri.

The deputy governor blamed the insinuation of a wide gulf between them on “fifth columnists who are hellbent on destabilising the present administration in the state.”

“Our administration has, in the last one year, achieved a lot in the area of education, health, security and infrastructure. We have also maintained regular payment of salaries.

“Those saying this administration has not achieved anything in the last one year are mischief makers who are hellbent on distracting and destabilising the government,” he said.

On the state government’s efforts at fighting COVID-19 in the state, Olaniyan said Governor Makinde was leaving no stone unturned to stop halt the spread of the virus.

He said that the administration, as part of efforts to combat the pandemic, had set up functional isolation centres, test centres and upgraded some health facilities across the state.

“We have also identified and distributed palliatives to poor people in the state in a very modest way. We ensured that these palliatives get to the targeted people and government is still doing this,” he said.

The deputy governor assured that the administration would remain focused and committed to the wellbeing of its citizenry.

Olaniyan said that protection of lives and property was a cardinal objective of the government, stressing that the administration is not toying with it.

He said that the administration would continue to implement people-oriented policies aimed at transforming the state.

Olaniyan, who congratulated Muslims on the successful completion of Ramadan fast and the Eid-el-Fitri celebration, called on the people to continue to live in harmony.

Teenager fakes own death over financial pressure from mother

Only eight COVID–19 cases are active in Zamfara ― Matawalle