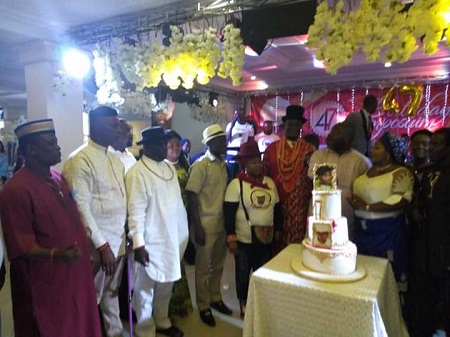 NIGERIA will know no peace until the oil-rich but impoverished Niger Delta region is developed and a genuine federalism is enthroned in the country, this was the declaration of Ijaws who gathered in Warri, Delta State on Thursday to celebrate the 47th birthday of the former militant, Chief Government Ekpemupolo alias Tompolo who was conspicuously absent.

Ijaws, both young and old, who thronged the event in their hundreds chanting Ijaw solidarity refrains, were clad in white T-shirts with inscriptions such as: “Happy Birthday, GOC,” and “Happy birthday, Hero of Niger Delta,” amid tight security.

Delivering a lecture on: “Niger Delta and the Burden of Resource Control,” Chief Mike Lolibo called on the Ijaw nation to continue its agitation for fairness and justice to the region.

Chief Lolibo, who described Tompolo as the liberator of modern-day Niger Delta, said the region and the country would know no peace until the issues of underdevelopment in the Niger Delta region were redressed.

He called on the Federal Government to, with no more procrastination, enthrone true and fiscal federalism.

“Niger Delta will not know peace until you address the problem of true federalism.

“Resource ownership and resource control were agreements reached by our founding fathers that is why the nation will not rest until the problems were redressed.

“Tompolo’s struggle gave us the Presidency in 2011. We will not rest until the injustice is redressed,” he averred.

According to him, the corruption charges against Tompolo, whom he lauded for promoting peace, is political, urging the government to drop them for peace to reign in the region.

On her part, Comrade Rosemary decried marginalization the region is subjected to, declaring that the Ijaw nation was committed to restructuring.

“We are marginalized. We should not accept this. Tompolo is the leader of the struggle of the Niger Delta; today, he is the GOC.

The Ijaw nation has never been conquered, restructuring is possible in our time,” she enthused.

In his remark earlier, Chairman of the event, Chief Wellington Okrika, who commended Tompolo for lifting the Ijaw nation, openly confessed that he had not met the expectations of Ijaw youths, pledging to do more for the Ijaw nation.