No NEC meeting will hold on Thursday ― Ajimobi-led APC faction

• Says it received the lifting of Oshiomhole's suspension 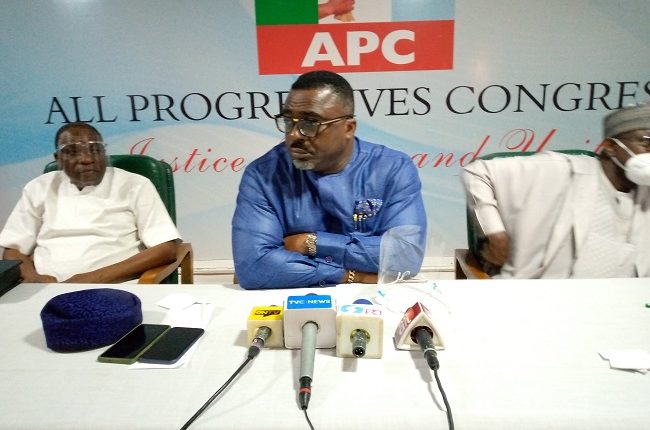 Senator Abiola Ajimobi-led faction of the All Progressives Congress (APC) on Tuesday dismissed reports that a meeting of the APC National Executive Committee (NEC) will hold at the Presidential Villa on Thursday.

APC vice-chairman, South-South, Hillard Etta who is acting in behalf of Senator Ajimobi said the rules for convoking the National Executive Committee meeting is clearly guided in the party’s constitution even as he announced receipt of communication on the lifting of the suspension of chairman, Comrade Adams Oshiomhole.

He said a minimum of 14 days notice was required to call for a NEC meeting, adding that the proposed NEC meeting at the Presidential Villa was null and void.

“Without prejudice to Article 25(B)(i) of this Constitution, the National Working Committee may summon an emergency National Executive Committee meeting at any time, provided that at least seven (7) days notice of the meeting shall be given to a those entitled to tend, the APC constitution stated.”

He argued that a larger part of the NWC belonged to the Ajimobi faction and are represented at the National Working Committee meeting it held earlier to receive the report of the Edo State guber primaries result in which Pastor Osagie Ize-Iyamu emerged the winner.

Etta who addressed the media after the meeting at the national secretariat denied that the party was sealed up earlier in the day, arguing that it has held its meeting in the same secretariat on Tuesday evening.

According to him, the police has cleared the air on the report signed by the Nigerian Police, National PRO, Frank Mba who said that the police was at the secretariat of the ruling party to maintain law and order and not to seal the building.

Etta said the Ajimobi-led National Working Committee has 15 members who made a physical appearance while two others joined the meeting virtually.

This, he said, buttressed the fact there is no faction in the executive even as it unveiled the presence of the latest member of the executive, Barrister Worgu Boms.

Present at the meeting was the deputy national secretary of the party. 15 members of the NWC were physically present making 17 out of a total of 20 members.

He commended the APC Edo guber primaries committee led by Hope Uzodinma for the good job it did in Edo by conducting a peaceful and successful election.

“Let me singularly thank the committee for a job well done, the NWC is indeed proud of you.

“As it is expected of us, we will hand this report to the appeal committee to enable them to do their work and submit it to the NWC for appropriate action.

“Let me start by telling Nigerians of the Ondo State remains 2020,” Etta said.

Omo-Agege’s support group, others defect to PDP in Delta

2023: I have no presidential ambition — Ali Modu Sheriff