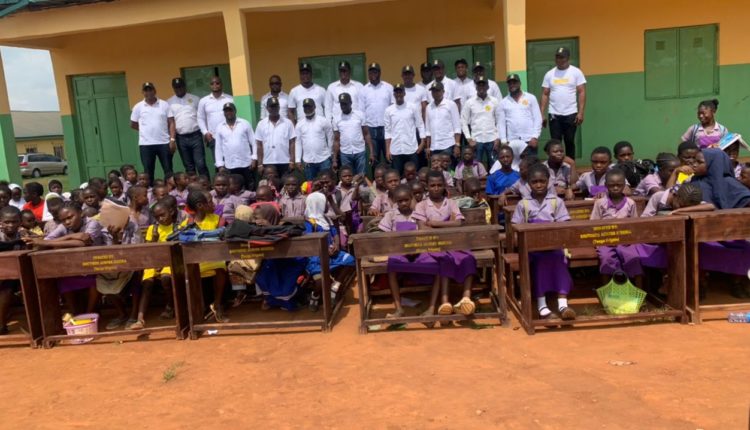 Tribune Online learnt that previously, the pupils sat on the floor while learning, a situation that moved the group to intervene.

While presenting the desks to the head teacher of the school, the chairman BAN Abuja chapter, Valentine Akus said they (BAN) believe that education is the bedrock of every society.

Akus said BAN also believes that primary education is the foundation stage of school which needs to be made conducive for pupils so that they could be encouraged to learn.

“We believe that trying to give pupils in the primary school a better learning environment will give them more commitment and zeal.

“As an immediate intervention, we have donated 40 desks for the children because before we came here, most of them were sitting on the floor while learning, and it is not good enough and we decided to intervene.”

Victor Ifemesia, chairman Joint Committee on CSR Brodas Across Nigeria, Abuja Chapter said during their visit to the school, they observed that the pupils were sitting on the floor while learning.

“I was put in charge to ensure we produce and deliver these desks to the pupils who were previously sitting on the floor and that is exactly what we did today.

“When we visited the school, we observed that the classrooms were lacking infrastructures and we initially thought of renovating one classroom, but the headteacher said their pressing need is desks because the pupils were sitting on the floor while learning,” he noted.

While responding, the Head Teacher of the School, Mrs Suleiman Augustina commended BAN for the gesture.

While seeking more interventions, Mrs Augustina noted that the desks will go a long way in encouraging the pupils to learn.

“So, I thank you very much on behalf of the school for donating these desks, and we pray that God will continue to uplift you. We still need more interventions because education is the responsibility of all and the government is doing their best, but it is not enough for us”, she added.