No, it was done in good faith —Dabang, APC chairman 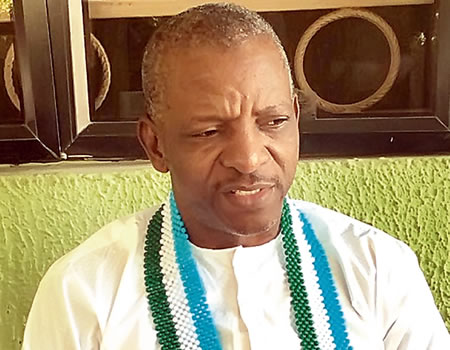 Honourable Latep Dabang is the Plateau State chairman of All Progressives Congress (APC). In this interview with ISAAC SHOBAYO, he speaks on the controversy trailing the appointments of management committee chairmen in four local government areas in the state, especially the insinuation that it was a ploy to create emirate on Jos North Local Government Area and other issues.

How do you see the controversy trailing the appointments of management committee chairmen for four local government areas in Plateau State?

The complaint doesn’t make sense at all. The governor deserves commendation for the conduct of the local government election in the state. There are many states in Nigeria which, in the past four years, have refused to conduct council election. But Governor Simon Lalong took the bull by the horns and conducted the election to ensure that there is democratic government at the local government level. But along the line, the election last year could not hold in four local government areas of Riyom, Barkin-Ladi, Jos North and Jos South. Due to insecurity, the election was suspended based on the advice from the state security council. If you look at the background of the governor, he is a democrat to the core and abhors any act that breeds injustice. He is lawyer, the longest serving speaker of the State House of Assembly.

Why didn’t the governor direct the conduct of election in these areas when he said peace has returned to the areas, instead of appointing management committee chairmen?

As far as I am concerned, this is not the first time that things like this happened in this state. It will be recalled that under the administration of the former Governor Joshua Dariye, a similar thing happened. Candidates were made chairmen of Transition Committees and incidentally I was the chairman of the State Electoral Commission at that time. To me, I think, for now, it is not practicable to conduct local government election in these four council areas for some obvious security reasons.

But the opposition alluded to the fact that the governor, at different forum, claimed peace has returned to the state, including the affected council areas. Right now, a trade fair is going on in Jos North to prove that peace has returned to the once-troubled local government. So the people are saying if there is peace as claimed, why not conduct election instead of appointment of management committees?

There are allegations that the governor was coerced into making the appointments, especially in Jos North to satisfy certain interest and also to pave the way for the creation of District and Emir of Jos for the Hausa in the local government. What is your take on this?

This is a figment of their imagination. How would this be possible when the establishment of district has come and gone? The report had since been submitted to the governor and he had already pronounced the chiefdoms and those chiefdoms are already in operation in some places. They were to be inaugurated during our campaign, but it was postponed for further action. I believe, any moment from now, the governor will go ahead to inaugurate those chiefdoms and districts or those ones that were promoted to one class or the other. So, what has transition chairman got to do with the establishment of districts or emir? It is just a clear mischief on the part of the opposition. What power does the management committee chairman have in any way that he will pressurise the governor to create chiefdoms, district or emirship? I am appealing to those playing politics with this issue to desist from such. The government has not acted outside the law. They should stop instigating people against the government. They should exercise restraint. Election will be conducted at the appropriate time. The APC-led administration on the Plateau is not afraid of election at the local government level. The major opposition party, the Peoples Democratic Party (PDP), was defeated in the local government election with wide margins in 12 of the 13 council areas where elections were conducted. They went to Local Government Election Petition Tribunal and got a judgment in the case of Langtang North, the governor swore in the party’s candidate. That is to tell the people that the governor is a democrat who abhors injustice and wants peace in the state.

There is also the allegation that the recent appointments by the governor were lopsided and skewed in favour of three local government areas of Jos East, Jos North and Shendam where the governor comes from.

This is not true. To me, the appointments that had been made so far are those of the Chief of Staff, Secretary to the State Government and Commissioners. There’s no local government without a Commissioner, some have two, particularly those local governments with two constituencies. Nothing has changed. When you are making appointment, there are two things in it.  One, you reward people for their performance. Two, it may be to encourage those who did not perform well in your election to sit up and have a sense of belonging. So, if you look at where the Chief of Staff and Secretary of State of the Government come from, whether the presidential, governorship down to state Assembly elections, these local governments stood out clearly. They were the leading local governments that gave APC wide margins that we are enjoying today. So, if the SSG goes to Jos North and Chief of Staff goes to Shendam, what is the big deal about it? Next time, people should key in and learn to give their best to get patronage. So, as far, as I am concerned, people are being rewarded for putting the party in the right perspective.

The general insinuation is that your governor is one of the close allies of President Muhammadu Buhari. What are the gains of this romance and loyalty in the past four years?

I don’t know what you mean. That he is the chairman of Northern Governors Forum (NGF) does not mean Plateau must have everything. It is wrong for anyone to blackmail the governor that he must bring something from the federal to the state. I think there’s no relationship that is too special between the president and governor. In any case. Governor Lalong is the chairman of Northern Governors Forum. It is something that we are proud of in the state because for his colleagues to have found him worthy of being their leader is a good thing for the state, as people of Plateau are proud of him. I want to say that even though the NGF has no constitutional backing, it exits for the convenience and coordination of activities.

What is the APC-led government in the state doing to assuage the feelings of those who lost in the recent appointments?

It will be a surprise if any party man will get bottled up to the extent of explosion in the nearest future because he missed out in the appointments made so far. The question is that those appointed are they party members or brought from heaven? If they are party members and they contributed in one way or the other, I see no reason why they should not get the appointments. In all local governments, you have APC stalwarts but it is only one that would be picked as commissioner.

But people are saying politics is not about love or affection, but interest and contributions.

What interest are they talking about? Are they saying their interest is quite different from that of the governor? In any case, it is the governor who has the right to appoint. He makes his consultations and appoints those he can work with. As a party chairman, mine is to ensure that those appointed are members of the party, rally round them so that they can succeed.