No going back on Water Resources Bill, FG says 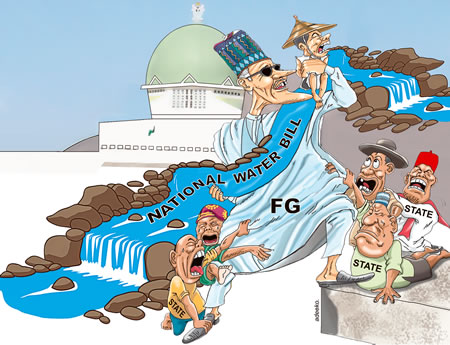 THE Federal Government has said it is not going back on the National Water Resources Bill 2020 which it has re-presented to the National Assembly, adding that those opposing the bill are not conversant with its details.

The government also said contrary to speculations, the southern part of the country will benefit more than the North, because the largest proportion of freshwater supply in the country is from the North.

Minister of Water Resources, Suleiman Adamu and his Information and Culture counterpart, Alhaji Lai Mohammed, disclosed this on Tuesday, adding that there is nothing new about the bill since it is an amalgamation of water resources laws which have been in existence for a long time.

Mohammed said the laws were being re-enacted with necessary modifications to bring them in line with current global trends, as well as best practices in Integrated Water Resources Management (IWRM).

“The overall objective of this amalgamation is the efficient management of the water resources sector for the economic development of the country and the well-being of its citizens.

The information minister said the bill does not seek to seize control of water resources from state governments because it is already on the exclusive list. He added that the Code of Practice for water well drillers issued by the Standards Organisation of Nigeria (SON) and the NWRI in 2010 already require commercial borehole drillers to obtain licence before proceeding with such activity.

“Please, note that borehole regulation is an international standard for abstraction of large volumes of water. Most countries in Africa and almost every developed country regulates commercial abstraction.

“It is also important to note that there is no requirement for licensing of domestic abstraction. Regulating abstraction of large volumes of water is necessary because groundwater abstraction is an activity that has environmental and ecological impact,” he added.

Mohammed also clarified that the bill does not negate the Land Use Act, because it clearly states that land required by any of the institutions established in the bill will be obtained in accordance with the Land Use Act (i.e with governor’s consent).

On the fear that the bill is aimed at taking the resources of a certain part of the country for the use of herders or that the Federal Government is seeking to implement RUGA by subterfuge, Mohammed said “this is not the intent of the bill and it is not even possible, as the bill reiterates the fact that land can only be acquired by any of the institutions established in accordance with the Land Use Act.”

Adamu, who presented a map of Nigeria to buttress his point, said the bill will ensure that no state government or large corporations deploy the country’s water resources in a way that will be detrimental to others.

According to him, the draft bill was ready to be presented to the National Assembly as far back as 2008 but ministers of water resources since then failed to forward it to the parliament for enactment.

Adamu said after he became minister, the National Council of Water Resources meeting of May 2016 had all commissioners responsible for water resources in attendance and they all endorsed the bill.

“From thereon, we took the bill to Federal Executive Council (FEC). FEC is made up of ministers from all the 36 states and the bill was approved by FEC,” he said.

Kicking against the move, however, the Southern and Middle-Belt Leaders Forum (SMBLF) vowed that the bill would not sail through at the National Assembly.

The forum said it would deploy all within its powers to resist what it described as “internal colonialism.”

Speaking to the Nigerian Tribune on telephone through one of its leaders, Mr Yinka Odumakin, the forum said the bill would never pass because those behind it the intention is not good.

“The bill will never pass because those behind it have no good intention. All sections of Nigeria that they want to colonise will reject it and they will have to conquer them to have this domination,” Odumakin said.

Speaking further, Odumakin said the forum had already mobilised the National Assembly members from the southern and Middle-Belt parts of the country to oppose the bill.