He said the two new universities in addition to the existing Lagos State University (LASU) Ojo are to expand access particularly for the people of the state, who are qualified and desire quality university education.

Mr Sanwo-Olu gave this impression on Thursday at LASU where he delivered this year’s annual governor’s lecture organised by the alumni association of the university. He spoke on “Educational leadership and technology as viable options for economic recovery and nationhood: The experience of Lagos State.”

According to him, the Lagos State project on the creation of two additional universities is at a concluding stage and we the executive are working closely with the state House of Assembly on this and now we have approached the National Universities Commission (NUC) for approval.

He said the intention was to upgrade the Lagos State Polytechnic (LASPOTECH) Ikorodu to the University of Science and Technology while the two state-owned colleges of education, Adeniran Ogunsanya College of Education (AOCOED), Otto- Ijanikin and Michael Otedola College of Primary Education (MOCPED), Noforija-Epe would be upgraded to universities of education. 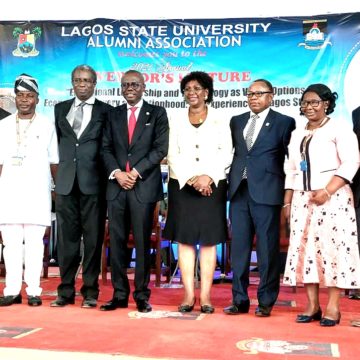 He said it was obvious that LASU could no longer alone provide admission for the increasing number of prospective undergraduates in the state, hence, the need for the two additional degree-awarding institutions to close the gap.

Speaking further, governor Sanwo-Olu who is the visitor to all the tertiary schools mentioned, also said his administration would likewise continue to create enabling environment for primary and secondary education, as well as vocational training to thrive in the state.

He said doing so and with the deployment of effective technology would be the surest way to produce total graduates that would be relevant in the 21st-century economy.

While commending LASU alumni for what he called their steadfastness and commitment towards lifting their alma mater, he promised the management and students of LASU of government continuous investment towards the growth and development of the university.

The governor, who earlier inaugurated the newly built Students’ Arcade which he described as the largest in Africa, also promised that the state government would donate two buses to the students and would equally support them in any area possible to make their studentship worthwhile.

In their separate remarks earlier, Chairman of Governing Council of LASU, Sir David Sunmoni, and Vice-Chancellor, Prof Ibiyemi Olatunji-Bello, commended the alumni association of the university for what they described as their selfless service and contributions towards the growth and development of their alma mater.

They said their contributions were not only well noted but yielding tremendous dividends for the university and its products.

The vice-chancellor, for example, who thanked the governor for finding her worthy for appointment as the ninth substantive vice-chancellor of LASU, said her administration’s target which rests on six strategic pillars is to move LASU to the level it would become the best university in West Africa.

In his own contribution, the chairman of the occasion, who is a former Minister of Works and Housing, Sen Adeseye Ogunlewe, tasked LASU to come up with a dedicated appeal fundraising money through alumni, corporate organisations, groups, friends of LASU, and so forth and strictly towards the development of the university.

He also asked the leadership of the university to develop a curriculum and courses of study along with the current economic needs of the country, saying that is the only way for Nigeria and its people to achieve desirable economic prosperity.