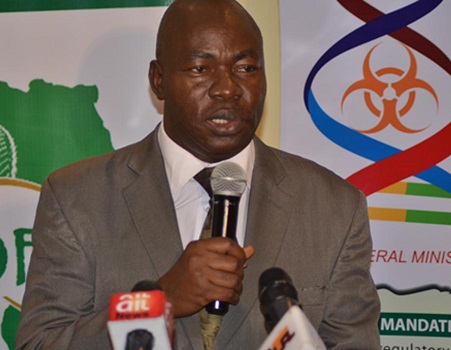 The National Biosafety Management Agency (NBMA) has said that currently, there are no genetically modified beans and fruits in the Nigerian market.

The Director-General of NBMA, Dr Rufus Ebegba disclosed this, on Tuesday, while briefing journalists on the state of biosafety in the country.

He said what is sold in the market are hybrid fruits and beans which is been misconstrued by the public to be genetically modified crops.

He said, however, that the mandate of the Agency is not to stop the application of Genetically Modified Organisms (GMOs), instead, the Agency is saddled with the responsibility of regulating the use of the technology.

“I want to restate here that the fruits and beans available in the Nigerian market presently are not genetically modified as insinuated rather they are either hybrids or improved.

“The federal government through NBMA is always poised to protect the health of its citizens and the environment by providing case by case analysis of GMO and risk assessments.”

He said globally, safe science and technology have been known to be drivers of economic change the world over, and Nigeria cannot afford to be left behind.

“That is why the federal government through NBMA makes sure it approves the only safe application of modern biotechnology for the economic development of the country, particularly in the Agricultural sector.

“Since the inception of the National Biosafety Management Agency (NBMA) in 2015, the obvious impact of the Nigerian Biosafety Authority has been felt all over the globe.

“From the decision to approve Bt Cotton for environmental release in 2016 to the decision to approve PBR Cowpea for environmental release in 2019, the NBMA has made decisions based on scientific facts for the benefit of the Nigerian people and just like our activities that have not gone unnoticed in Africa, it has not gone unnoticed worldwide.

“This is why the Nigerian Biosafety system is well sort after in Africa and the world as our regulations and guidelines have become models that other countries use in developing their own guidelines and regulations,” Dr Ebegba noted.

He said as part of efforts to expand its monitoring and surveillance, the Agency has signed a various memorandum of understanding with some sister agencies such as Standards Organization of Nigeria, Nigeria Agricultural Quarantine Service, National Seed Council, Nigerian Customs Service ensuring that the Nigerian boarders are well monitored in case of any unapproved GM import.

“Other stakeholders we have signed MoU with include the Varietal Release Committee and the Department of Veterinary and Pest Control Services under the Federal Ministry of Agriculture and rural development.

“The NBMA has not been resting on its oars in ensuring that only safe and approved genetically modified seed and grains for food and feed processing are allowed into the Nigerian market hence the constant upgrading of our GM detection and analysis Laboratory and our constant Inspection of GMO facilities, confined field trial sites and multi-locational trial sites. This is for proper Surveillance, tracking and monitoring of GMOs in Nigeria.

“In line with the mandate that has been added to the Agency, on regulating new modern biotechnologies such as gene drive, gene editing, synthetic biology and ensuring Biosecurity, the Agency has developed a draft National Biosecurity policy which was presented to stakeholders by the Honorable Minister of State for the environment last December.

“The Agency has equally developed gene-editing guidelines which have been validated by stakeholders. The guidelines will ensure the proper regulation of gene-edited products.

“However, some plants edit their genomes themselves independent of human efforts that are naturally hence cannot be expected to be regulated. But any man-made or scientifically inserted gene into an organism or plant will be regulated.

“While gene editing and modern biotechnology are both genetic engineering tools, it will be out of ignorance to say all gene-edited products are GMOs. A product can be termed GMO only if it contains a transgene.

“However, gene editing does not in all cases require the introduction of a new gene into the genome of an organism. It could be deletion or suppression of a gene,” he added.

In spite of the huge investment in the water sector by the government and international organisations, water scarcity has grown to become a perennial nightmare for residents of Abeokuta, the Ogun State capital. This report x-rays the lives and experiences of residents in getting clean, potable and affordable water amidst the surge of COVID-19 cases in the state… No genetically modified fruits, beans in market

The Lagos-Ibadan railway was inaugurated recently for a full paid operation by the Nigerian Railway Corporation after about a year of free test-run. Our reporter joined the train to and fro Lagos from Ibadan and tells his experience in this report… No genetically modified fruits, beans in market