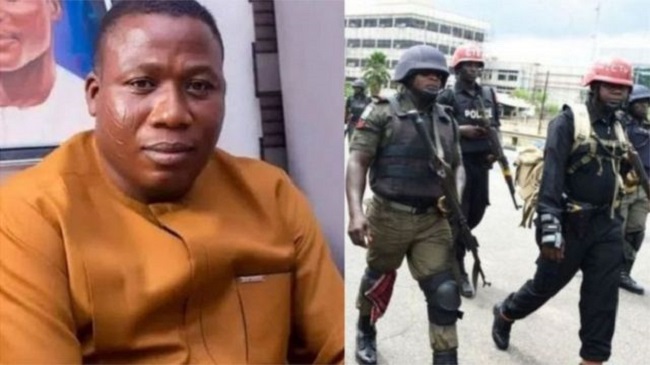 A High Court in Ibadan, Oyo State, on Tuesday admitted as exhibit video clips of alleged invasion by the Department of State Services (DSS) on the residence of the Yoruba nation activist, Sunday Adeyemo, a.k.a Sunday Igboho, on July 1.

Alliyu had earlier informed the court that his client’s house and cars were damaged and that two people were allegedly killed by security agents during the invasion.

However, during the hearing on Tuesday, counsel to the AGF, Abdullah Abubakar, said that there was no evidence before the court that the blood seen in the video tendered by Alliyu belongs to human beings.

At Tuesday’s hearing, Justice Ladiran Akintola admitted the exhibit after listening to Alliyu’s submission on the originating summons filed before the court.

Akintola also admitted as exhibit, video clip tendered by the DSS counsel, Mr T. A. Nurudeen, where Igboho allegedly threatened to create Oduduwa Republic, break away from Nigeria and ask Yorubas to fortify themselves with charms and guns.

The court ordered the two video clips to be played in the open court as requested by Igboho’s counsel and DSS counsel.

Addressing the court after playing the two video clips in the court, AGF counsel, Abdullah Abubakar, said that there was no evidence before the court that the blood seen in the video tendered by Alliyu belongs to human beings.

Abubakar also said that there was nothing in the video clip that showed that the house that was invaded belonged to Igboho or linked the AGF with the invasion.

He urged the court to disregard the exhibit and dismiss the entire suit.

Counsel to the DSS, Nurudeen, aligned with the AGF’s submission, adding that there must be proof from a haemotologist to show that the blood seen in the video belongs to a human being or cat.

In his argument, Alliyu said that the video clip tendered by the DSS can be referred to as a cinema because the language used in the video was Yoruba which was not the language of the court.

He said that the DSS did not tender any evidence denying the killings or invasion of his client’s house and damaging some properties therein.

The News Agency of Nigeria (NAN) reported that the court also heard the submission of all the counsel on the preliminary objection challenging the jurisdiction of the court to entertain the matter.

Akintola thereafter adjourned the case until September 17 for ruling and judgment of the suit.

Borno sets date to close all IDP camps in Maiduguri

Anambra election: Insecurity may hinder us from voting, say persons with disabilities…