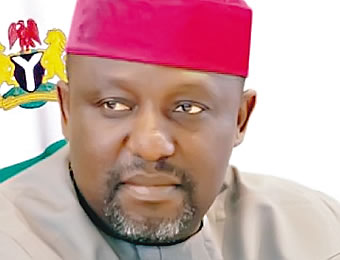 CERTAIN chieftains of the All Progressives Congress,(APC) from Imo state on Tuesday stormed the national secretariat of the party to reinforce the position of the state governor, Rochas Okorocha that ward and local government congresses have not been held in the State.

The State chapter could not conduct its local government congress last weekend as the party secretariat was burnt down by unidentified individuals. It was however held on Monday but the governor and his supporters boycotted the process.

Speaker of the Imo state Houses of Assembly, Honourable Acho Ihim, who spoke on behalf of his colleagues at a meeting with APC national chairman, Chief Odigie Oyegun demanded for a new date for conduct of ward and local government congresses.

“The new date should be announced and the whole things should be ratified and there will be peace in the state.

“It is not good that we are wasting our time coming here to talk about congresses. The shenanigans that we saw can never be taken for congresses. We are taking this very seriously, and that is why we are here to affirm same, that no congress held and we here are saying that we support his Excellency, Owelle Rochas Okorocha, and we stand by him at all times.”

Honourable Ehim denied the claim that governor Okorocha was demanding for fresh congresses having lost out in the power game in the ruling party.

“Go to the grassroots, he has his admirers everywhere, he remains a beautiful bride.”

On governor Okorocha alleged plot to impose his son-in-law, Uche Nwosu as the party candidate in 2019, the lawmakers declared that the Imo state governor reserves the right to support any candidate.

“You will agree with me that Uche Nwosu is qualified to hold the position.

One, he’s a bonafide citizen of Imo state of Nigeria and he’s of age, academically sound and the governor as a person endorsing his son-in-law, he has his preferences as a person, I have mine too and we all do. You too do. And as such, whoever you want to endorse, you too can endorse.