No amount of pressure will stop reconstruction of Bauchi govt house, says Commissioner 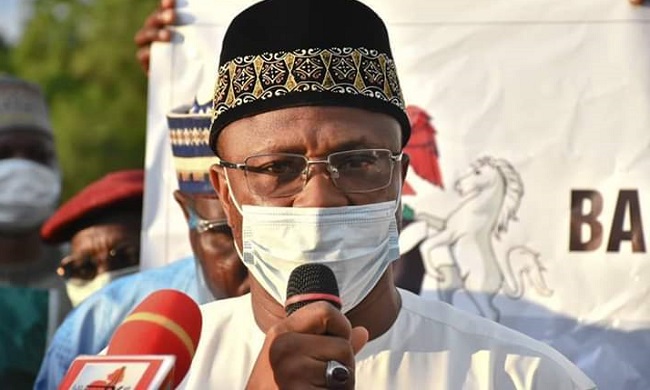 Bauchi State Government has declared no amount of pressure by the opposition will make it abandon its drive to develop the state insisting that the reconstruction of the existing Government House in Bauchi, Governor’s Lodge and Governor’s residence in Abuja are priority projects that will be executed by the administration as included in the 2021 budget proposal.

State Commissioner of Information and Communication, Garba Dahiru in a press release on Saturday stated that the present Government House was built, at the creation of the state, in 1976., the expanded nature of government business demands a physical expansion and reconfiguration, to inject the required physical synergy that even the digital age, has not completely rendered redundant It is an irony that in Bauchi State we have an APC opposition that has allergy to progress and development.

The Commissioner further stated that, “Our attention has been drawn to a media report on the proposed reconstruction of the Bauchi State Government House. Though the report which was based on a press briefing by the Bauchi State Commissioner for Housing and Environment, Hon. Hamisu Muazu Shira was substantially accurate, yet, by questioning the proprietary of such a project amidst of the COVID-19 pandemic and the inflation that the country is experiencing, it had made it incumbent on the Government to make the clarifications”

He alleged that “the previous Government conceived a project-basket of more than 40 roads without executing one. Billions of Naira were spent on mobilization without any trace of execution. Let us make it very clear from the onset, the expansion and reconfiguration is no different from similar projects undertaken by Governors Ahmed Mu’azu on Ramat House (Presidential Lodge), VIP 9 and the newly constructed VIP 5, Guest Houses by the immediate past
administration.”

He added that, “recall also that, VIP 10 was purchased and renovated by Governor Isa Yuguda, while Governor M. A. Abubakar did a facelift of the Governor’s Residence. No one cared or dared to speak? The entire projects Governor Bala Mohammed is undertaking will not be financed through FAC proceeds, but from performance-based, World Bank grants and recovery funds. The N6 Billion Project is among the least projects of its kind in the country”.

The Commissioner while describing it as a False Interpretation stated that, “The story conveys the impression of immediate wholesale appropriation of the funds for the project, without consideration for other priority projects. This is completely untenable. Granted that the amount has been budgeted, it is still subject to the strictures of funds availability.”

He, however, stated that, “What is important is that such a desirable project kicks off, with the state government applying the rigorous and prudent management of resources, a practice of this Administration that accounts for the sustained delivery of the dividends of democracy by way of infrastructural projects, people empowerment and security of lives and property”.

Government according to him is mobilising resources through deliberate and efficient measures, to free funds that were being misapplied in other sectors of the economy and through improvement in the IGR of the state.

Garba Dahiru also stated that, “Thus, to imagine that the overdue reconstruction of the Government House will scuttle other priority projects is only a figment of the imagination of those who cannot come to terms with the resolve of the Bala Mohammed Administration to leave an indelible footprint on the sands of Bauchi’s development”.

He added that, “to suggest, as the story does, that the project could lead to the misplacement of priorities flies in the face of the unprecedented infrastructural and people-oriented projects that the Bauchi State Government has undertaken in less than two years of the existence of the Bala Mohammed Administration”.

According to the Commissioner, For anyone to suggest, let alone claim that a government that has sunk over N14 billion in the provision and rehabilitation of roads alone, is misplacing priorities, is the height of misplaced judgement and outright hypocrisy.

He claimed that In less than two years, the Bala Mohammed led Administration has also sunk more than N14 Billion into rebuilding schools, provision of electricity and water as well as other infrastructural amenities, in a paradigm shift that has taken the dividends of democracy to the nooks and crannies of Bauchi State.

“For the doubting Thomases and naysayers whose stock-in-trade is to dampen the morale of the people, we want to assure them that the Bala Mohammed led Administration will never sacrifice the welfare of the people or the rapid transformation of Bauchi State on, the altar of self-serving ostentatious projects”, he stressed.

He explained further that Contrary to the misleading impression being created by some unrepentant traducers of the Bala Mohammed led Administration, affirmed that the reconstruction of the Government House will be executed in phases, in such a way that no other important Government project will suffer.

“It is also important to clarify that prioritization does not imply that capital projects, that advance the image of government and the convenience and comfort of its principal functionaries, should be allowed to suffer exclusion or atrophy simply because some naysayers have mastered the ignoble art of blackmail” the Commissioner explained

Garba Dahiru then stated that, “for the avoidance of doubt, we wish to reiterate that, the reconstruction of the Government House is an integral part of the urban renewal initiative of the Bala Mohammed Administration that has so far witnessed extensive environmental rehabilitation, reconstruction and rehabilitation of intra-city roads in the state capital, land reforms and provision of potable water”.

“It is ironical that critics of the Government House project have conveniently turned a blind eye to another component of the urban renewal programme, that is, the ambitious new Bauchi City development programme of the Administration”, he stressed.

The Commissioner stressed further that, “a government that has become the hallmark of this Administration, the retirees of the state will bear witness to the effort being made by the Government, to implement the existing agreement over their pensions and gratuities. All in all, it goes without saying that the state government workers have never had it so good, in a very long time.”

“It is therefore, preposterous, capricious, mischievous and indeed arrogant for anybody, under whatever guise, to pretend to hold a higher moral compass than the reasoned endorsement of the people of Bauchi State, of the policies, programmes and performance of the Administration of Governor Bala Abdulkadir Mohammed”, he opined.

The Commissioner therefore declared that, “Neither will the well-deserved reconstruction of the Bauchi State Government House nor the malevolent attacks of Bala Mohammed’s traducers, change this hard-earned respect and support.”

The surprise visit made on Friday night by the leaders of the ruling All Progressives Congress (APC) to former President Goodluck Jonathan at his residence in Abuja triggered a stir in the major political camps, resulting in at least four possible theories..No amount of pressure  No amount of pressure