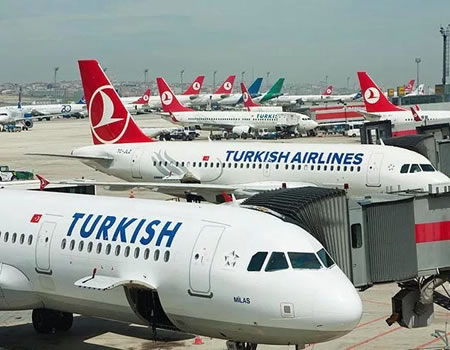 The Nigerian Labour Congress (NLC) has said it will picket the operations and facilities of Turkish Airlines from Tuesday following alleged violations of workers and trade union rights.

A circular serving as notice to the airline management and other relevant authorities signed by the President of NLC, Comrade Ayuba Wabba, said the union would mobilize the Nigerian workforce to picket the airlines.

Wabba lamented how the NLC and its affiliate unions in the aviation sector had written several letters to the management of the airline on the issue of workers and trade union rights, which he said manifested in the sack of trade union leaders working in Turkish Airlines.

According to Wabba, the labour leaders were sacked for demanding compliance with Nigeria’s labour laws that grant workers the right to join trade unions of their choice and participate in trade union activities.

Despite all the efforts made by the union, the management of Turkish Airlines had also rebuffed with “utter disdain conciliatory efforts made by labour and the Ministry of Aviation.”

The unilateral sack of executive members of NUATE working with Turkish Airlines, Wabba said was particularly distressing and very reprehensible, adding that these workers were sacked for fighting for the rights of Nigerian workers in Turkish Airlines.

Wabba further said: “We wish to remind Turkish Air that unionized workers cannot be punished or sacked for participating in trade union activities. This action is aimed at frustrating unionization in Turkish Airlines and enslaving Nigerians working with Turkish Airlines.

“The anti-labour practices in Turkish Airlines constitute fundamental infractions on our Constitution and labour laws and gross disrespect to Nigeria. Section 40 of the 1999 Nigerian Constitution guarantees freedom of association including the right to join and participate in the activities of trade unions.

“Furthermore Section 12 subsection 14 of Nigeria’s Trade Union (Amendment) Act 2005 provides for voluntary membership of trade unions and stipulates that no worker should be victimized for joining a trade union or participating in the activities of a trade union. We posit that the sack of NUATE executives working with Turkish Airlines violates their human and trade union rights.”

Tinubu@69, a visionare extraordinaire, moving steadily to the next level –  Olatubosun