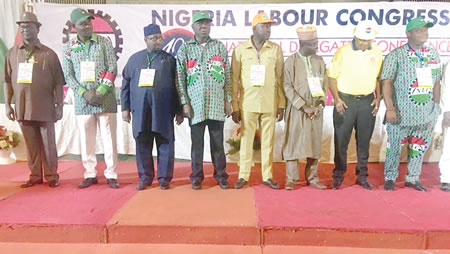 The re-election of Comrade Ayuba Wabba as the President of Nigeria Labour Congress (NLC) amidst peaceful atmosphere without rancour has brought renewed hope to Nigerian workers of all grades.

Following the 12th Quadrennial National Delegates’ Conference held at the International Conference Centers, Abuja, Comrade Wabba, who was also recently elected as the President of the World’s International Trade Union Congress (ITUC), was re-elected the President of NLC. Wabba will lead the 16-member National Administrative Council (NAC) of the congress for the next four years.

Others are Marwan Adamu, as the National Financial Secretary and Adewale Adeyanju, National Trustee. Comrade Wabba and the other 15 officials were all re-elected unopposed.

The conference is with a theme”Towards a Decade of Activism for the Promotion of Labour Unity; National Rebirth and Development.”

As he got the new mandate, Wabba, vowed to confront headlong all the challenges faced by the workers along with his new executive. He said “We will dedicate ourselves to ensure that the challenges workers face are confronted headlong. Workers are treated as slaves while those that don’t even work hard take higher pay.”

He said the new leadership must build workers power to be able to change the equation and must confront the political power to ensure that workers live decent lives.

On the issue of new minimum wage, he pointed out that the organized Labour would not allow governments at any level or private employers to hide under the increment to retrench workers.

The NLC President insisted that the struggle would be to ensure the implementation of the new minimum wage by federal and state governments.

He, therefore, charged all the affiliates and the state councils as well as the partners to be ready for the battle ahead for the implementation of the minimum wage without retrenchment.

As a leader, he pointed out that his executive would not take unilateral decisions on issues affecting the workers; but assured that the Labour movement would continue to take instructions from the rank and files.

Most importantly, he said his leadership would always speak the truth to the powers to protect the interests of the working class.

“The new leadership of NLC will respect the will of members and consolidate on what we are doing. We will continue to conform to the tradition of the union and speak the truth to those in power. The daily challenges of workers at work places will be confronted. We have been able to work assiduously in the past four years and we will move forward to build workers poser. I assure our members of our commitment and dedication to the resolutions of the conference.”

One lesson from the 12th National Delegates’ Conference is the smooth process and the fact that it was rancour and crisis free unlike what saw obtainable in 2015. The crisis that characterized the 2015 delegates’ conference ended in creating factions in the congress, which eventually forced two strong unions, National Union of Electricity Employees (NUEE) and the National Union of Petroleum and Natural Gas of Nigeria (NUPENG) to leave the NLC to form a center of their own, the United Labour Congress (ULC).

However, the General Secretary of the NLC, Comrade Peter Ozo-Eson, said the congress has learn from its past mistakes.

Answering questions on why all the positions were unopposed and if it was a predetermine arrangement to forestall the repeat of the 2015, crisis, Comrade Ozo-Eson said there was no election since there was no position contested.

“Every organisation learns from its own mistakes. What happened in the last one perhaps influences how people took their positions but that is a process of politicking and a process of preference.

“For us, ours is to take what we see in nominations and we processed them forward. We have received the nominations, and as we published it, it is one slate. So, that is what we have seen this time. It is being done before, it has happened before, so it won’t be the first time.”