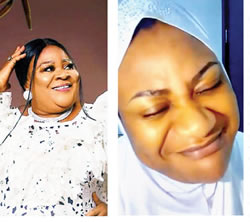 With just five days to the birthday of her mother, popular actress, Nkechi Blessing’s dream of throwing a lavish birthday party for her mother and unveil a new house, has been truncated with the woman’s sudden death.

The controversial actress in a statement made available on Friday said she could not come to terms with the fact that her mother died suddenly after complaining of “minor stomach upset”, wondering how she would live her life without a mother she described as the “biggest pillar” holding her life together.

“Mummy, you left in a flash. Your only complaint was a stomach ache and that’s the last I heard of you. If the doctors had asked for money to keep you alive, I would have begged the world to help me save you,” she said.

She also described her mother as a warrior who would always stand at her back telling her she is unstoppable, adding that she didn’t wait to see her birthday gift, “the one I was working endlessly day and night to build for you. You were a landlady in Lagos already but you couldn’t wait to see it.”

Friends and colleagues of the actress have been sending their condolences to her as they urged her to remain strong and keep making her mother proud even in death.

IPOB orders sit-at-home for October 1, no Nigerian flag in South-East