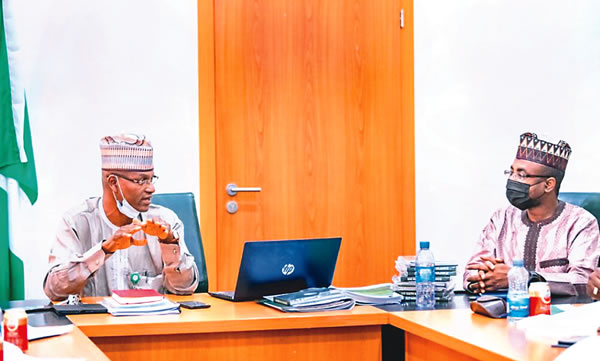 THE National Information Technology Development Agency, (NITDA) has been advised to continue building skills and capacity of Nigerians to develop the Information and Communications Technology (ICT) sector.

Mr Festus Dauda, the Permanent Secretary, Ministry of Communications and Digital Economy, said this when NITDA’s Director-General, Mr Kashifu Inuwa, led some members of the agency’s management staff to brief him on the activities of the agency in Abuja late last week.

Dauda, who was recently sworn in as the permanent secretary, said that the ICT sector was dynamic and had the ability to transform every other sector.

“You need to make sure that the necessary capacity is developed within the ecosystem because you have a lot to do.

“If you do not develop your capacity in this particular sector that is dynamic, you will lose touch with current realities.

“Information technology has all it takes to drive most of the abundant resources this nation is blessed with for its effective development,” he said.

The permanent secretary commended NITDA for its laudable achievements across the country and enjoined the agency to work collaboratively with sister parastatals and IT stakeholders to achieve the objective of a digital Nigeria.

Daudu assured NITDA of his support towards enabling it to achieve its mandate, especially in the area of clearing ICT projects of Ministries, Department and Agencies (MDA).

Earlier in his presentation, Inuwa informed the permanent secretary of various NITDA’s initiatives and how they had been impacting positively on the Digital Economy Policy of the government.

The D-G stated that the agency’s efforts at localising government data had resulted to the repatriation of 98 per cent of data that were hosted off shore of the country back to Nigeria.

“We have a surveillance team that looks at all ICT contents in the country.

“The sales of hardware under the indigenous content development have witnessed unprecedented record of over 1.2 million devices sold between 2015 to 2019.

“The investments in indigenous software development mandated by NITDA in Federal Government institutions stand at over N1.3 billion,” Inuwa said.

He reiterated that the agency’s interactions were targeted at developing the economy of the country, adding that the country recently focused on building the capacity of Nigerians to acquire skill necessary to drive a digital economy.

Inuwa said: “in 2020, we trained citizens across the six geopolitical zones and engage in-person and virtual training, which we were able to train over 35,000 on different courses on ICT.

“We also developed the capacity of 1,500 Nigerians at our e-Government Training Centre.”

He said the agency has creatd a N2.2 billion industry and 2,686 jobs through the implementation of the Nigeria Data Protection Regulation (NDRP) and remitted N12.6 million to the Federal Government.

Inuwa, however, said that NITDA’s roadmap of 2016-2020 aligned with the National Digital Economy Policy and Strategy (NDEPS) but the one for 2021-2024 was yet to be launched.

According to him, launching the current roadmap will consolidate on the NDEPS for digital economy development.

“The National ICT Policy with which the agency was created has become obsolete and the new policy of Digital Economy has compelled the agency to rebrand and reposition itself for better performance.”

Inuwa said that all the efforts on ground were not the end but a means to the end, adding that the end depends on how the agency was impacting people’s lives for digital economy development.