NISER staff protest, ask FG to save institute from calamity

• Investigative panel report will address allegations against me ― NISER DG 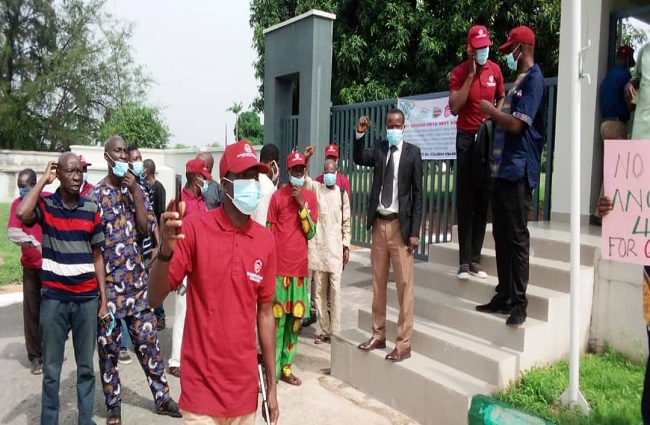 Members of the Joint Action Committee of the Nigerian Institute for Social and Economic Research (NISER) Ibadan, have called on the federal government to save the institute from ‘calamity’ by not returning its incumbent director-general, Dr Folarin Gbadebo-Smith at the expiration of his tenure on May 27.

Chairman, ASURI, Babatimehin Muyiwa; Chairman, NASU, Tubi Theophilus; Chairman, SSAUTHRIAI, Matthew Olagunju, who led the protest, said the DG’s tenure for the past four years was a great disservice to NISER and to the research sector and should not be allowed to continue.

Chairman, ASURI, Babatimehin Muyiwa, who spoke on the unions’ behalf, alleged that the DG’s tenure suffered academic and administrative incompetence as seen in four years of low research output, poor staff welfare, non-conversion of qualified staff and refusal to promote some non-research staff.

Furthermore, the unions pointed to non-prioritisation of research where less than 40 percent of total capital releases are used for research.

They noted that the institute received close to N1billion between 2017 and 2020, with non-commensurate output (both research and non-research) and little improvement in infrastructure.

The unions also demanded the federal government to investigate alleged procedural, administrative and financial infractions inimical to the development of NISER.

The unions held that there has been no corresponding output when compared with the resource input.

They queried what they called procedural inadequacies in the appointment of the director-general, and asked the federal government to appoint a new director-general of NISER in line with the conditions of service for federal research and development agencies, institutes and colleges.

The unions asked for an immediate investigation into what they described as allegations and administrative and financial infractions.

He also decried the sudden dissolution of the NISER governing council and demand the reason behind the purported dissolution be investigated.

The unions also demanded the release of the report of the investigative panel set up by the Minister of State for National Planning on controversies generated by promotion, research and publication inadequacies at the institute.

Furthermore, the unions alleged that non-adherence to due process in the award of contracts and poor capital performance from 2017 to 2020, and for real expenditure for research and non-research activities be made known.

When contacted on phone, Dr Folarin Gbadebo-Smith said the allegations against him did not start on Tuesday and that the Minister of State, National Planning had constituted a panel on the matter.

He said both the panel and the minister had told him not to grant press interview on the allegations until the panel’s report is released.

But he was quick to say the whole palava bordered on the fact that some people within the institute did not want his appointment, which would elapse this month, to be renewed for another period of four years.