NIN now required to board trains from May —NRC 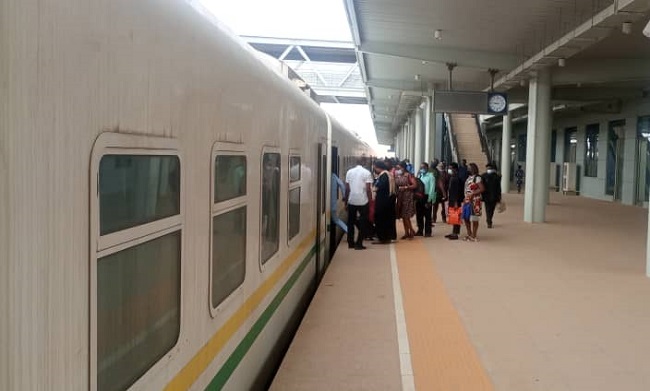 INTENDING railway passengers should get their National Identity Number (NIN) ready as it will be a requirement from May.

Managing Director of the Nigerian Railway Corporation (NRC), Mr Fidet Okhiria, stated in Abuja on Thursday that the NIN would be needed to enhance the profiling of passengers, the News agency of Nigeria (NAN) has reported.

This, he explained, would also enhance the safety and security of rail users. “The process of linking passengers to their NIN for improved profiling is ongoing. This layer of passenger screening will commence by May.

“The Abuja-Kaduna Train Service (AKTS) will resume as soon as possible with additional security measures put in place,” Okhiria stated.

The NRC suspended the Abuja-Kaduna route following a March 28 attack by assailants, who injured passengers and kidnapped some.

Okhiria said the security agencies were working tirelessly to ensure the rescue and release of all abducted passengers.

He stressed that 362 passengers and 20 crew members were on board the train when it was attacked.

“While we continue to sympathise with families of those who lost or have not seen their loved ones, we encourage anyone still looking for a loved one to please call us.

Okhiria added that the NRC had re-railed the last rolling stock affected in the attack. Meanwhile, the Minister of Transportation, Mr Rotimi Amaechi, has directed the NRC to handover tickets and passengers’ identification to Secure ID, the company in charge of the E-Ticketing platform for Abuja-Kaduna rail service.

According to the News agency of Nigeria (NAN), Amaechi said this will help in reducing incidents of crime and also curb security challenges on the route. Amaechi said this when the Infrastructure Concession Regulatory Commission (ICRC) visited and presented the Full Business Case Certificates (FBC) for the Lagos-Ibadan and Itakpe-Warri E-Ticketing service, to him in Abuja.

He said the introduction of the E-Ticketing platform for Abuja-Kaduna, blocked all revenue leakages and increased generated revenue on the route from about N100 million to N400 million monthly.

“The one I think I may disagree with the public, is the issue of ticket racketeering, I have spoken with the person in charge of Abuja-Kaduna eticket platform to take over the identification process from NRC.

“Because what the National Assembly told me is that NRC doesn’t cross-check the identification of passengers on the tickets. They wanted to do it, but they have not gotten approval from NRC.

“So, I have told NRC to allow them to do it, so that we match faces with the names; it’s not all about crime alone, but it is also about security, so we release it to those security outlets. “Even though we cannot eliminate 100 per cent crime and corruption, it will reduce the danger of having to run into security crises.

“That way, we will know that what we are battling with is not crises in our terminals, but on the road, and I believe that that will also be sorted out as we go to cabinet for approval of the security gadgets,” Amaechi said.

While presenting the FBC, Mr Michael Ohiani, the Acting Director-General of the ICRC, said that the concession was for a period of 10 years.

According to Ohiani, it will generate over N140 billion for the country during the period and also help create over 3000 direct and indirect jobs for Nigerians.

“The concession is for 10 years. It is going to generate over N140billion to the Federal Government, most importantly, it will also create job opportunities for over 3000 direct and indirect jobs.

“The next phase is for the minister to take it to the Federal Executive Council (FEC) for approval and the Ministry of Justice will now clear it. Manji Yarling, Acting Head, Media and Publicity of ICRC said the overall scope of the project is to design, finance, build, operate and manage a secure ticketing solution system (Hardware and Software) for the passenger’s station on the Lagos-Ibadan and the Warri Itakpe Standard Train Service.

In his response, the Minister of Transportation hailed the move to concession the service, noting that the Abuja/Kaduna rail e-ticketing concession was a testament that such concessions are profitable and can generate more money for the government.

He said that prior to the concession coming into effect, the Federal Government only generated about N189 million every month from the Abuja–Kaduna service, whereas the figure rose to N400 million after the concession came into effect.

The minister added that although the number of coaches on the service was increased, there was still clear evidence of increased revenue as wastage had been eliminated.

FG may conduct census in April 2023