National Chairman of the main opposition political party in Nigeria, Peoples Democratic Party (PDP), Prince Uche Secondus has declared that the country’s political space is wide enough to contain every politician in the country stressing the movement from one platform to another is allowed in politics and therefore Nigeria is not an exception.

He also said that though it is always painful to lose a member of a political party, there is nothing that can be done to stop a determined mind from not doing whatever has been decided to be done insisting that there is no wrangling in the party either in Bauchi state or at the national level.

While Addressing Journalists shortly after a 2 hours closed-door meeting with some serving and former Governors as well as other national leaders of the party held at the Ramat House, Bauchi Friday evening, Uche Secondus said that “if one is not comfortable staying in a political platform, he/she is free to move on to another platform best suitable for him/her.”

The PDP national Chairman was reacting to the recent defection of former Speaker of the House of Reps, Barrister Yakubu Dogara from the PDP to APC saying that “it is a welcome development, he has the freedom to move on. But, the fact remains that the PDP platform is intact and large enough to accommodate everyone.” 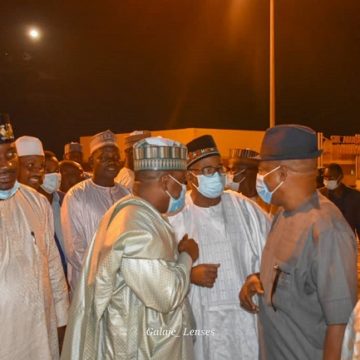 On the 2023 General Elections, Uche Secondus promised to provide a level playing ground for all the party members wishing to contest one office or the other, describing PDP as a very democratic party that is all accommodating to various shades and aspirations.

Answering a question on the zoning of the presidency come 2023, the PDP National Chairman said that, “we respect that and it is in our constitution but when the time comes, we will make it public for everyone in the country to know”.

He further clarified that it is not true that the party has abandoned any politician in favour of others for any office come 2023 assuring that, “everybody has the right to aspire, it is left for the members of the party to decide who gets what political offices.”

On the purpose of their coming to Bauchi, He said that “We arrived Bauchi and we met with our hardworking Governor, we are here on a solidarity visit and during this meeting, we held a very useful discussion with the Governor on how to consolidate the Electoral gains of the PDP.”

Leading a delegation of top party leaders on a solidarity visit to Bauchi State Governor, Sen Bala Abdulkadir Mohammed, Uche Secondus commended what he described as a “modest achievement within a short period of time” describing Bala Mohammed “as a hardworking Governor and a valuable asset to the party.”

The PDP National Chairman then pledged the readiness of the PDP to continue to support the Governor for the success of his administration and for the victory of the party in future elections.

Also speaking to newsmen, the Deputy National Chairman, North of the PDP, Senator Sulaiman Nazif Gamawa used the medium to acknowledge the commitment of Governor Bala Mohammed towards the overall development of the state saying that there is no rift within the party in the state as the Governor remains the leader of the party.

Though they did not disclose the reason for the recent visits and consultations around the country, it may not be unconnected with preparations for the 2023 politics on how the party can get back to winning ways, particularly at the presidency having lost out of power for 8 years.