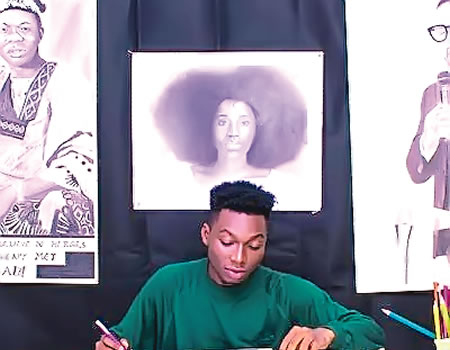 In continuation of the tradition of producing talents of stellar quality in the Nigerian entertainment scene, RedAce Management Company- the talent management arm of Africa’s foremost PR/media & communication agency, The RedAce Company, has announced the signings of two of Nigeria’s best entertainment providers.

Making the announcement at a press conference in Lagos during the week, RedAce Management Company unveiled the signing of a management deal with Nigeria’s leading pencil artist, Alesh Akeem and fast rising music sensation, Adejola Abayomi Olanrewaju a.k.a ‘96’.

Speaking on the management deal, the Director of RedAce Management Company, Mr Olubunmi Adeyera, disclosed that the singing of the deal has become imperative to ensure the profitable exploitation, discharge and engagement of talent and creative works, both locally and internationally.

Recall that Alesh Akeem is known to have painted and presented art works of international celebrities such as J.Cole, Ciara, T-Pain, The Migos etc and as well just concluded his “Celebrating 10 Kings” tour, a project that focuses on celebrating 10 exceptional kings across Africa through art.

Adeyera also hinted that UK-based music sensation, ‘96’ with his unique kind of sound is ready to take the Nigerian music industry by storm as he is ready to officially release his songs after which he would immediately commence his media tour.

While newsmen quizzed ‘96’ on why he has decided to do his music in Nigeria and not in the United Kingdom, where he is based, he responded that his kind of music which he described as afro-pop is entirely different from the existing norm, and for maximum fulfilment of his career as a musician, adding that the Nigerian market is best suitable.

‘96’, whose real name is Adejola Abayomi Olarenwaju hails from Abeoukuta, Ogun State and holds a Bachelor’s Degree in Business Administration from Heriot-Watt University, Edinburgh, United Kingdom. He has recorded danceable tracks with both local and international producers.