Nigeria’s economy will bounce back —Dangote 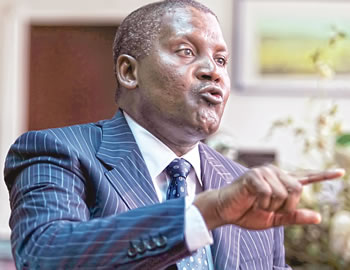 PRESIDENT of Dangote Group, Aliko Dangote, has assured that there will be light at the end of the tunnel, with efforts being made by the Federal Government to develop other sectors of the economy long neglected in favour of oil.

The business mogul, speaking with members of business group who paid him a visit in the spirit of the Eid-el-fitri, said the situation the nation was passing through was as a result of years of over-dependence on oil to the detriment of other sectors, adding that with the crash of the oil price in the international market, the nation’s receipt also crashed, leading to paucity of funds.

He, however, said the nation would come out strongly from the economic quagmire, given the present government’s diversification moves which would not only reposition the country as a producing nation, but also with many sources of revenue which, on the long run, would impact on the people positively.

Dangote cautioned that the turnaround could not be automatic, saying “it will take time, but surely better life will come. We just have to be patient and do our own bit because government alone cannot do it.”

According to him, the current reality prevailing in the international oil market provided the best opportunity for the nation to diversify the economy, leveraging on the agriculture sector.

He also advised state governors to take advantage just as the Federal Government had commenced process of diversification at the national level.

“I believe this is the best period in the history of our country to actually diversify our economy, rather than seeing the current happenings from a negative perspective,” he said.