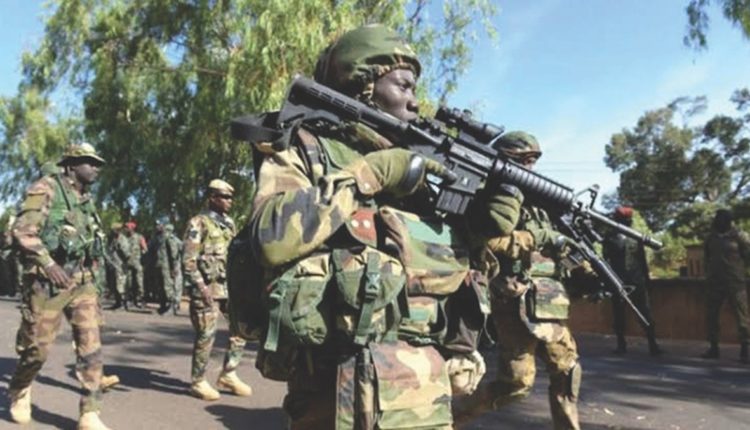 The Defence Headquarters on Tuesday said that the combined troops of 403 Special Forces Brigade, Baga and Niger Republic troops supported by Air Task Force of Operation Lafiya Dole had an encounter with some Boko Haram/ISWAP elements at Kure village along Tumbun Rago and Tumbun Fulani general areas of Borno State on Monday during which the insurgents suffered heavy casualties.

This was contained in a statement made available to newsmen in Abuja by the acting director, Defence Media Operations, Defence Headquarters, Brigadier General Benard Onyeuko, who said that the attack was in continuation of the ongoing clearance operations in the North-East by the Nigeria Armed Forces

According to the statement, “consequently, the terrorists were decisively dealt with during the encounter, the terrorists suffered heavy casualties and unconfirmed number escaped with gunshot wounds

“Some of the items recovered included one gun truck, one anti aircraft gun, one motorcycle, one light machine gun, one AK-47 rifle and a magazine, 227 rounds of 12.7mm ammunition and 10 rounds of 7.62 mm special ammunition.”

It however stated that there was no casualty or equipment losses by the joint military forces during the encounter which lasted several hours.

COVID-19: Bodies Are Being Left In Streets In An Overwhelmed Ecuadorian City
The streets of Ecuador’s western city of Guayaquil are deserted, with few residents in sight and a few dead, as bodies are being left in the streets of this overwhelmed place. The coronavirus pandemic is overloading the public services in the country’s most populous city to a point of collapse. Hospitals have no beds left to accept… Read full story

Alternate Perspectives On Nigeria’s Covid-19 Response
First, my thoughts and prayers go to our health workers. These men and women of valour risking it all battling at the frontline of COVID-19 are the true heroes of the moment. Almost every country in the world is shut, trying frantically to curb and reverse the spread of the coronavirus. Over the last weeks, major cities… Read full story