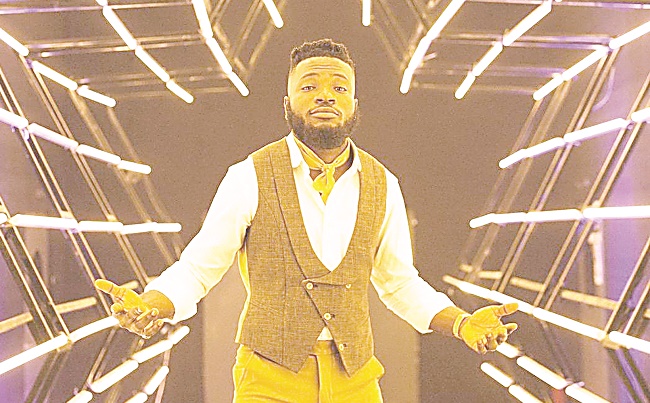 Dotti, real names Oladotun Okeowo, emerged the winner of the maiden edition of the MTN sponsored Y’ello Star. He beat 13 other singers in a keenly contested competition judged by musical heavyweights like Banky W, Omawunmi and six-time Grammy award nominee, Malik Yusef. ROTIMI IGE caught up with him recently and brings excerpts of the interview.

Tell us your journey so far as a musician…

I wrote my first song when I was six years old and performed it to an audience of two- my grandparents (laughs). I remember my grandfather praying for me after the performance.

He eventually bought me my first piano at age 12. When I finished secondary school and I was going to fill my JAMB form, they wanted me to study medicine. I ended up studying music technology at The Polytechnic, Ibadan.

My hustle has been music ever since, working as a freelance songwriter. I have written and sung a couple of popular jingles on the radio for GTBank Quick Credit, Lipton Ice Tea, Hawaii soap, Dettol. The list is long. I have ghost written for a couple of A-listed artistes too.

I put out my first single in December 2019 titled ‘Jolly Christmas’. Then I put out an EP in the early days of the lockdown in 2020 which I titled ‘Songs in Isolation’. The EP was about my headspace within that period.

It was a beautiful experience, I enjoyed it thoroughly. It tested my versatility as a musician, an artiste and also my relationship skills, not just with fellow contestants but crew members also.

It was totally different from the other competitions I had been on. It offered more opportunity and empowerment. Berkelee, for example, is a dream come true for me.

Your takeaways from the competition…

Hard work pays eventually, no matter how long. It pays better with humility. And also, do not be afraid to spread your wings and be yourself.

What should fans expect now that you are back in the real world?

I plan to show them that they didn’t make a mistake voting me as their winner. There’s been a low turnover of reality show winners that end up doing well. I promise to live up to expectations.

What kind of music do you do?

I’ve got a lot of guns in my arsenal because I am a student of music. I am very comfortable with a spectrum of musical genres. But I stay true to my roots. So you could say I’m an Afro fusion artiste.

You will be travelling out to Berkelee School of Music and will record a song in America, what are your expectations?

Music is a lot about sharing. I’m very eager to take in as much as I can of the western culture as well as share my own musical experience. I believe being open-minded will help me come up with a wonderful song.

What current projects/visuals are you working on?

I am presently rehearsing and recording. I have a virtual concert slated for the first week of February and also a single in that same week.

You won a house, car and prize money. You are also now an MTN ambassador. Did you see any of these happening in 2020?

How will you utilise your current status to stamp your authority on the entertainment industry especially when many who have won reality singing competitions before have failed to trend, after a few months?

To whom much is given is what they say. A habit of hard work and planning will help me in a lot of ways. And of course, my team and I have a plan to utilise the tools and connections that winning has availed me.

Any collaborations in the works?

Well, an emphatic yes! But I can’t reveal at the moment, so fingers crossed.

What do you think is lacking in the Nigerian music industry and what can be done to change it?

I think the industry is not diverse enough. Most artistes sound alike in every musical period. I think artistes generally should stop being afraid of being genuine and resist the urge to join the bandwagon. If the music is good, people will buy it. Johnny Drille is a worthy mention.

What could you have been if not an entertainer?

A medical doctor or a radio presenter.

The British Parliament at the Westminster Hall held a debate on ‘e-petition 554150, relating to Nigeria and the sanctions regime’ on Monday. The government of the United Kingdom has however responded…Nigerian musicians  Nigerian musicians

The surprise visit made on Friday night by the leaders of the ruling All Progressives Congress (APC) to former President Goodluck Jonathan at his residence in Abuja triggered a stir in the major political camps, resulting in at least four possible theories..Nigerian musicians  Nigerian musicians

From basketball court to board room: The Bryce Thompson story