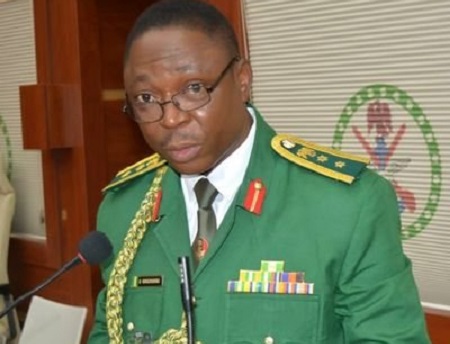 THE Defence Headquarters has dismissed the alleged recruitment of de-radicalised Boko Haram ex-fighters into the Nigerians military.

The Acting Director of Defence Information, Brig-Gen Onyema Nwachukwu disclosed this in a statement on Sunday in Abuja.

Nwachukwu described the information being peddled on social media as false and misleading, urging Nigerians to disregard it in its entirety.

According to him, DHQ wishes to state that the claims are not only bereft of the truth, but laced with mediocrity emanating from poorly researched and uninformed position.

“Contrary to his claims, no Boko Haram ex-fighter has been recruited into the Nigerian military and no such plan is in the offing.

“The de-radicalisation, rehabilitation and reintegration programme is a Federal Government programme conducted under the auspices of Operation Safe Corridor as a non-kinetic operation.

“Nigeria’s de-radicalisation model is a very effective one, targeted at low-risk combatants and has become a classical example in the Lake Chad Basin region and West Africa,” he said.

The defence spokesperson further disclosed that over 250 repentant insurgents, who willingly abandoned their struggle and surrendered to federal troops, had been de-radicalised, rehabilitated and re-integrated into the society.

He explained that Nigeria’s de-radicalisation model was in tandem with global standard as being done in Algeria, Colombia, Pakistan and Saudi Arabia, where persons involved in violent extremism have been de-radicalised and rehabilitated.

“There has not been report of molestation or harassment of any sort against them by members of the communities, where they are resettled.

“As a matter of verifiable fact, the reintegrated ex-fighters are doing well in their various endeavours and are positively impacting on their respective communities.

“It is also expedient to state, that the Federal Government of Nigeria has continued to prosecute BHT/ISWAP suspects in courts of competent jurisdiction and over 500 terrorists have so far been convicted.

“Meanwhile, the next round of prosecution of another batch of terrorism suspects is due to commence shortly.

“The Defence Headquarters reiterates its commitment to ensuring a well-motivated, trained and equipped Armed Forces that is professionally responsive to national security commitments,” he said.