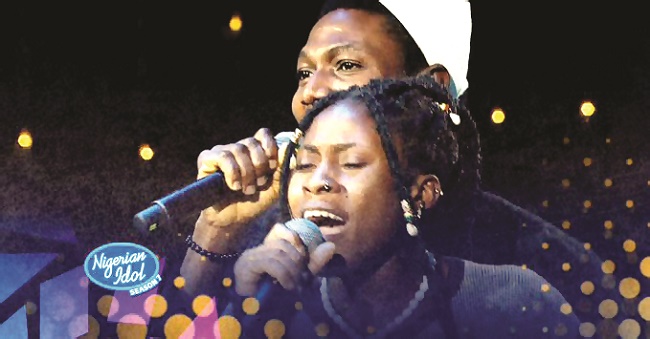 If the auditions were tough, theatre week proved to be more challenging. For Theatre Week, 25 people were asked to go home following the first round of eviction with the remaining 50 proceeding to the second round.

For the second round, the contestants were paired and asked to select a song to practise for 24 hours. Here, their ability to perform excellently in a duet was put to the test. From the pairing, some of the contestants complained about their partner and their inability to work together as a team.

One of the contestants who complained was Jitey, she expressed her concern about her inability to blend well with her partner. She admitted that they were both excellent singers individually but not together.

Precious and Chisom were the first pair to perform. They chose ‘Sinner’ by Adekunle Gold and Lucky Daye and practised with a voice coach, Malie Kelly.

In front of the judges, Obi Asika, D’banj and Simi, the duo gave a fantastic performance that received commendation. Simi chided Chisom for being nervous and not looking at them. Overall, the judges commended their ability to work together to give a good performance, and both of them went through to the next round.

Chris and Isioma also combined well to move to the next round after they both delivered a superb performance in front of the judges.

Azuka and Kelvin were next, but they did not impress the judges with their performance. They failed to work well as a team, which showed in the way they sang. After a string of duets that impressed the judges, the duo was the first to be asked to leave.

La Mood and Collins also struggled to convince the judges of their ability to work together. However, the judges were impressed with Collins, and he got to move to the next round. La Mood, however, who had complained about her partner’s mood affecting her, was asked to leave.

Progress and Debby sang ‘You are the Reason’, and despite Debby being under the weather, the judges complimented their chemistry. Both got the pass to the next round.

Remii and Ochiora combined to sing ‘Jealous’ by Labrinth and did an excellent job with it. Both of them played the guitar and blended well with ease earning high praise from the judges. Both got a pass to the next round.

Itohan and Jordan were a perfect match as the judges stood up to applaud the performance after they sang. Simi urged them not to stop singing and said she hoped they would continue to do well. Their duet was one of the best for the night, and they got a pass to the next round.

Eyo and Ikemefuna did not go to the next round as their performance did not impress the judges. According to the judges, they did not perform well as it seemed they just wanted to be done with the performance without enjoying it.

Wisdom and Banti sang ‘Comforter’s Song’ by Jeremiah Gyang and Asa. According to the judges, only one of them brought all the energy to the stage. Banti moved to the next round, but Wisdom did not meet the judges’ expectations.

Joel and Mathew struggled while practising for their duet, and it seemed like they would not do well on stage. The judges noted that they did not ‘gel well’. Despite that, they did enough to convince the judges and moved to the next round.

Abigail and Gerald were the last pair to perform in the first round of theatre week, and they delivered an eye-catching performance that wowed the judges. They closed the curtain with a beautiful duet that earned both of them a pass to the next round.

In spite of the huge investment in the water sector by the government and international organisations, water scarcity has grown to become a perennial nightmare for residents of Abeokuta, the Ogun State capital. This report x-rays the lives and experiences of residents in getting clean, potable and affordable water amidst the surge of COVID-19 cases in the state…Theatre week sees 50  Theatre week sees 50

The Lagos-Ibadan railway was inaugurated recently for a full paid operation by the Nigerian Railway Corporation after about a year of free test-run. Our reporter joined the train to and fro Lagos from Ibadan and tells his experience in this report…Theatre week sees 50  Theatre week sees 50

My background influences the charitable work I do — Williams Uchemba

Nudity can be tastefully showcased in films — Actress, Omowunmi Dada