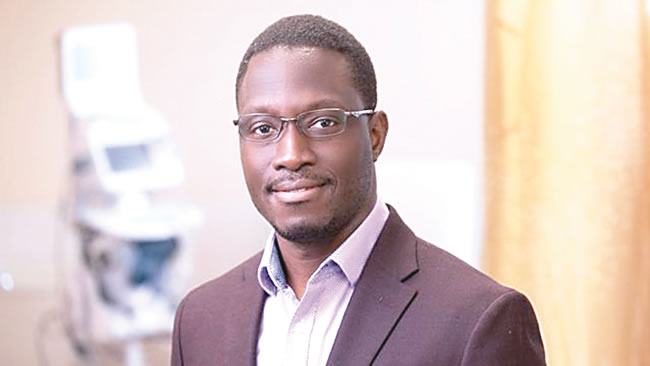 A Nigerian doctor, Onyema Ogbuagbu, has been recognised as an important figure in the research that led to the development of the first effective COVID-19 vaccine by United States (US) pharmaceutical company, Pfizer.

Ogbuagbu, an Associate Professor of Medicine and Infectious Disease Specialist at Yale School of Medicine graduated in 2003 from the University of Calabar with a degree in medicine. After graduation, he interned at the Ebonyi State University Teaching Hospital, Abakaliki, Nigeria.

He then proceeded to intern at Mount Sinai School of Medicine (Elmhurst), New York. He rose to become chief resident at the same school after which he became a fellow of infectious diseases, Yale University School of Medicine, New Haven, Connecticut.

He is also the director of the HIV clinical trials programme of the Yale AIDS programme.

Ogbuagu is one of the twin sons of Chibuzo Ogbuagu, a former vice-chancellor of Abia State University, and Stella Ogbuagu, a professor of sociology who was best graduating student of the 1974 class at the University of Nigeria, Nsukka (UNN). His twin brother is an engineer.

The Nigerian-born professor has led several researches in the US and Africa. He has over six years experience working as a faculty of the human resources for health programme in Rwanda where he mentors medical residents and junior faculty in quality improvement and clinical research projects that are locally relevant and addressing important infectious diseases-related problems (particularly HIV/AIDS and antimicrobial resistance).

He became the programme director of the World Bank and HRSA-funded efforts supporting the Liberia College of Physicians and Surgeons (LCPS)–run internal medicine residency training programme, where he oversaw the selection and deployment of faculty to Liberia.

For five years, he has worked as director of the Yale HIV clinical trials programme, and a principal investigator on numerous pharmacokinetic, phase 2 and 3 safety and efficacy trials of novel antiviral compounds.

Ogbuagu is one of the doctors leading the Pfizer trial. He is Yale principal investigator on multiple investigational therapeutic and preventative clinical trials for COVID-19, including remdesivir (now FDA approved), leronlimab and remdesivir and tocilizumab combination therapy as well as the Pfizer/BioNTech vaccine trial.

On how they were able to reach 90 per cent efficacy and what it means for the process moving forward, Ogbuagbu in an interview with the ABC news said: “Those of us involved in the trials are really super excited by the results which were quite unexpected. We expected that vaccines should have at least more than 50 per cent efficacy which the Food and Drug Administration (FDA) set as the bar but it is so heart warming that vaccines have been so effective.

“It is great because having a very effective vaccine will help us achieve the so-called herd immunity which means we will have enough people that will receive the vaccine and are protected against the virus. This could really be the beginning of the end of the epidemic.”

The vaccine developed by Pfizer and BioNTech was tested on 43,500 people in six countries. Half were given the vaccine, and half a placebo and no safety concerns have been raised so far. The companies also plan to apply for emergency approval to use the vaccine.

The news of the vaccine was received with so much joy because no vaccine has gone from the drawing board to being proven highly effective in such a short period of time.

According to reports, two doses of the vaccine, three weeks apart, are needed. The trials – in US, Germany, Brazil, Argentina, South Africa and Turkey – show 90% protection is achieved seven days after the second dose.

More data released from their continuing phase three trial suggests it works equally well in people of all ages and ethnicities.

However, not everyone will get the vaccine straight away and countries are each deciding who should be prioritised. Hospital staff and care home workers will be near the top of every list because of the vulnerable people they work with, as will the elderly who are most at risk of severe disease.

“Obviously, there is insufficient dosage for everyone and we are hoping we have more doses by first quarter of 2021 and that might mean the epidemic really ending,” Ogbuagbu said.

Another challenge is the need to store the vaccine at -94 degrees at all times even while shipping.

Ogbuagbu, however, said this has been known ahead of time and preparations have been made both by the government including Pfizer who is working to have the vaccine stored at low temperature.

“You know it’s recognised that the cold chain is an issue, especially for Pfizer. But you know these have been known way ahead of time and so preparations are being made, both under Government and appropriate networks; as well as Pfizer who is also helping with their own independent distribution plan.”

He added that even though the vaccine was done at an unprecedented pace, it was done thoughtfully and carefully, passed through all the right stages and safety checks and is authorised by the FDA.

He said a lot of work needs to be done in reassuring the community of this safety, especially those that might be hesitant to getting the vaccine despite the approval.

“A lot of work really needs to be done to reassure them. And I hope I’m doing so, also going on a programme to really show the public that, even though the vaccine trials have proceeded at an unprecedented pace, it is being done carefully, thoughtfully and with the right amount of oversight so that vaccines receive emergency use authorisation by the FDA and it passes through all the safety check to show that the efficacy numbers are real and that should really assure the public.

“All the safety checks and the efficacy numbers are real and that should really reassure the public.”

Ogbuagbu has been receiving accolades for this great feat.

The US Embassy in Nigeria gave special recognition to Ogbuagbu for the contributions he made to the development of the vaccine.

In a message posted on Facebook, the US Mission in Nigeria wrote: “Nigerians contribute to the world in so many ways. Our hats off to Dr Onyema Ogbuagbu at Yale who helped develop a COVID-19 vaccine!”

A message titled ‘Recognition of Excellence’ in the post states: “Dr Onyema Ogbuagbu, a Nigerian doctor, helped the drug company Pfizer develop the first effective COVID-19 vaccine in the United States. An incredible contribution to ending this world-wide pandemic.”

“We are very proud of the efforts by Dr Ogbuagu and several other Nigerian scientists and health professionals in Nigeria and the diaspora, especially as part of efforts to end the acute phase of this COVID-19 pandemic,” Ihekweazu said.

“Despite the challenges in our country, there are several Nigerians that have been well-trained through our educational system and are in turn, contributing to scientific knowledge and interventions globally.

“We are very proud of the efforts by Dr Ogbuagu and several other Nigerian scientists and health professionals in Nigeria and the diaspora, especially as part of efforts to end the acute phase of this COVID-19 pandemic,” Ihekweazu said.

“Despite the challenges in our country, there are several Nigerians that have been well-trained through our educational system and are in turn, contributing to scientific knowledge and interventions globally.

If we keep our promises, we’ll remain in power after 2023 —Fashola