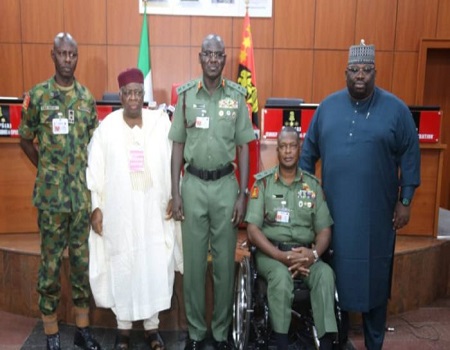 The Chief of Army Staff, Lt.-Gen. Tukur Buratai has announced the decision of the Nigerian Army to revive polo sport in the country.

Buratai disclosed this while inaugurating a five-man Board of Trustees for the Nigerian Army Polo Association on Wednesday in Abuja.

He stated that polo had been a long-standing military endeavour in promoting professionalism among officers.

According to him, “Nigeria had been known to be good in polo game in the past and so we must revive the old game that the country is well known for.

“If you go round the country, almost all the polo grounds that were initially constructed by the Nigerian army, are unconsciously handed over to other users due to dwindling participation of Nigerian army over the years.

“We are not taking these facilities back but we want to reestablish ourselves fully again to tap full benefits of the polo game in the Nigerian army as well as encouraging it in Nigeria.

“We are working towards global participation in all polo activities and the process has already started with procuring equestrian drugs for horses.

“Of course, we are recruiting special horse handlers as well as players and experts so that we can fully start in promoting this important game,” he said.

Buratai disclosed that the members of the board being inaugurated were selected based on their experiences, love for the game and their interest in a polo game.

According to him, by their long-standing association with the Nigerian army in various capacities, we have seen their capacity and capability to carry Nigerian army polo to the required height.

He assured the new board of the full support of the Nigerian army by providing them with the needed latitude to enable them to carry out their assignment.

“I want to assure you that we will fully cooperate with the national body of the Nigerian Polo Association and any other interested partners that will wish to develop polo game,” he said.

The Chairman of the Board, Col. Dangiwa Umar (rtd), who was represented by a member, Maj.-Gen. Mohammed Garba (rtd), pledged to carry out their assignment towards developing polo game in Nigeria.

Garba said that the board would work with all stakeholders to revive the existing polo facilities across the country.

He urged officers of the Nigerian army to begin to develop an interest in the game, adding that by virtue of their training at the Nigerian Defence Academy (NDA), they were expected to be able to handle horses.

He, however, thanked the Chief of army staff for seeing them worthy to pioneer the board of trustees of army polo association.

FG to establish agro-allied industry in each senatorial district