Nigerian Armed Forces get new generals, others in massive promotions 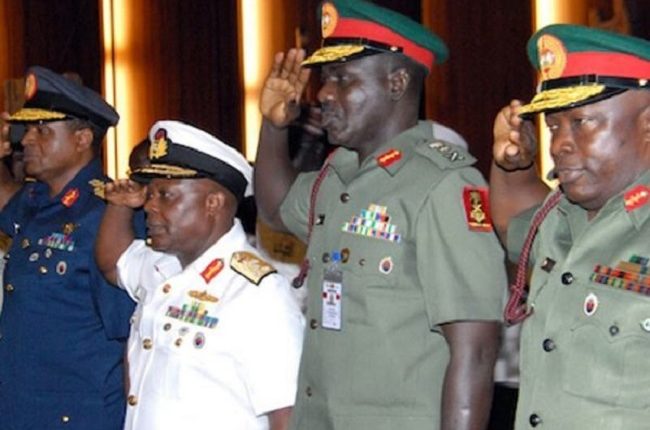 The High Command of the Military has approved mass promotions of Senior officers in the Armed Forces of Nigeria.

According to a statement by the Director of Army Public Relations, Brigadier General Onyema Nwachukwu.a total of 117senior personnel were approved for promotion on Tuesday,

The Chief of Army Staff, Lieutenant General Faruk Yahaya congratulated all the promoted officers and their families, and urged them to redouble their effort to justify the confidence reposed in them by the NA

From the Nigerian Air Force Council (AFC) a total of 60 senior officers comprising 29 Air Vice Marshals (AVMs) and 31 Air Commodores (Air Cdres) were prompted to the next higher ranks.

The Director of Public Relations and Information, Nigerian Air Force, Air Commodore Edward Gabkwet said that the Council also approved the concessional commission of an Air Warrant Officer (AWO) and 5 Master Warrant Officers (MWO) to the rank of Flight Lieutenant.

The concessional commission is usually reserved for Senior Non-Commissioned Officers (SNCOs) at the twilight of their career years in reward for hard work and in recognition of meritorious service to the Nation.

He added that the Chief of the Air Staff, Air Marshal Oladayo Amao, on behalf of officers, airmen, airwomen and civilian staff of the NAF, congratulated the newly promoted senior officers and SNCOs and urged them to see the elevation as an impetus to re-dedicate themselves towards effective and efficient service delivery especially in today’s era of joint force employment.

Also, the Navy Board approved the promotion of 56 naval officers to various senior ranks in the Nigerian Navy.

He added that the Chief of the Naval Staff, Vice Admiral Awwal Gambo on behalf of officers, ratings and civilian staff of the Nigerian Navy, rejoiced with the newly promoted senior officers and their families and charged them to rededicate themselves to their responsibilities and remain loyal to the nation and the Commander-in-Chief of the Armed Forces of the Federal Republic of Nigeria, President Muhammadu Buhari

A similar exercise was approved on Tuesday in the Nigeria Police Force, NPF by the Police Service Commission PCS.