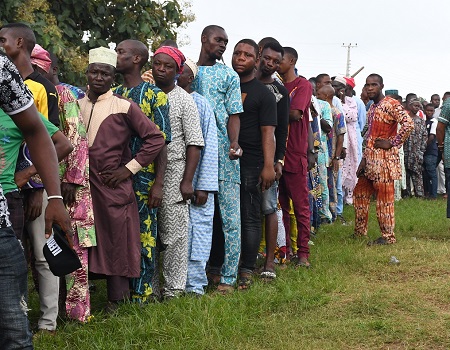 Tragedy struck on Saturday in Mararaba, Karu Local Government Area of Nasarawa State, ‎as three kids were reportedly suffocated on the backs of their mothers at a polling centre during the Presidential and National Assembly elections.

The Sunday Tribune also gathered that four other female voters including ‎a pregnant woman fainted at the same polling centre marked “008 Mararaba” and were quickly rushed to a nearby hospital where they were eventually revived.

According to eyes witnesses, the incidents followed the long hours the voters who turned out in their numbers ‎as early as 6 am waited without the officials of the Independent National Electoral Commission (INEC), on ground to commence the voting exercise until 12 noon.

It was also gathered that even at that, the voting proper could not commence partially until 1:30 pm as the electoral officers could not unlock the card readers brought to the centre.

The officials claimed that one of the card readers meant for the voting centre had been stolen on transit.

“Following the long hours spent here waiting for the INEC officials to commence the voting, the sad incidents occurred in succession and the three kids suffocated on the backs of their parents while other four women fainted.

“The heat is too much and their mothers covered them with hijab before help could come their way, it was rather too late,” an eyes witness account told Tribune Online.

In a related development, a middle-aged man described as a known political thug was nabbed at the same centre for illegal possession of a ballot box already thumb-printed and brought to the centre.

He was seen being whisked away with handcuffed by security agencies to an unknown destination.

A senior police officer told Tribune Online at the scene of the incident that the details surrounding the case of the suspect was still scanty and needed to be investigated to be able to get to the root of the matter before he could make any categorical statement on it.

“It is true, he was caught with the loaded ballot box and our attention was called to it. So, we need to find out from him, the source of the ballot box and his motive as well as other variables, we can not just jump into conclusion now,” the officer stated.

However, voting was still in progress as at press time (6.58pm) due to the large crowd at the centre and the shortage of the card readers, ‎and the insistence of the prospective voters who insisted that they must vote and their votes must count.

While this was going on, the electoral officer in charge of the polling centre was said to have sneaked out of the environment to an unknown place, thus making the voters to suspect a foul play, more so with the arrest of the suspect with the loaded ballot box.

When approached, one of the INEC officials said that she was a youth corps member and as such was not competent to speak with the press.

Meanwhile, latest report from the polling centre indicated that ‎all the card readers being used had stopped working so the electoral officers suggested head counting. The suggestion was turned down by voters and described as daylight robbery.

There was mounting tension at the centre.