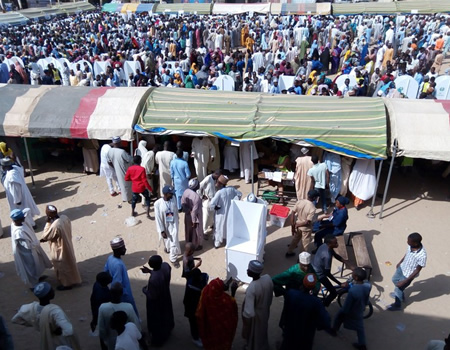 The Independent National Electoral Commission (INEC), at the weekend, shifted the blames of missing names of prospective voters on its register to the affected eligible voters.

In some  polling units across the country, prospective voters with their Permanent Voters Cards searched in vain for their names on the commission’s manual voters list.

Reacting to the unsavoury development while briefing newsmen, the National Commissioner and Chairman Voters Education and Publicity Committee of INEC, Mr Festus Okoye, said the affected voters who could not exercise their franchise during yesterday’s conduct of presidential and national assembly elections  were to be blamed.

He claimed such eligible voters did not make use of the window created by INEC to verify  their names  on the Voter Register during the seven days set aside for verification of the list of voters.

He said: “They needed to find out their names. We displayed the voter register for claims and objections for seven days for people to check their names on the  voter register. Their failure to do this accounts for this last minute situation where people are looking for their names.”

He admitted the delay in the commencement in accreditation and voting across the states but disclosed that the commission has directed for extension of voting hours in the identified polling units.

“There shall be extension of voting time in polling units where accredited and voting were delayed. If  a voting unit is supposed to be activated by 8 a.m. and to be closed by 2 p.m. and it isn’t activated by 8 and it starts by 12 noon, then we add the hours that have been lost.

“We expect that all the polling units will open by 8 a.m., but we knew that there will be few challenges, that there is a possibility that in a few places, our staff may have a slight delay. There might be security issues that may delay their collection of materials. “

The INEC National Commissioner denied reports of missing results sheets but noted that the delay might have been informed by the action of presiding officers whom he claimed were guarding the sensitive materials jealously to avoid a situation where they fall into wrong hands at polling units.

While he expressed regret over incidents of malfunctioning of Smart Card Readers, the INEC spokesman claimed reports of hacked SCR were unfounded.