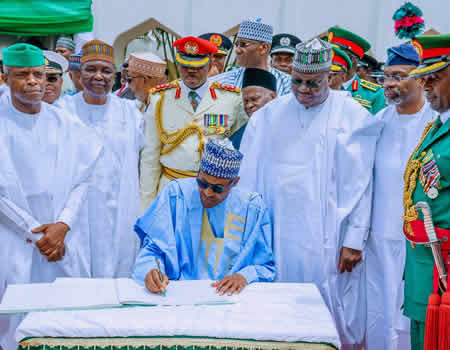 THE climax of the 59th independence anniversary of Nigeria was held at the forecourt of Presidential Villa, Abuja, where President Muhammadu Buhari hosted dignitaries to a special military parade and change of guard.

The Federal Government had announced that the celebration of this year’s independence would be marked with low-key but the event on Tuesday was colourful and characterized with pomp and circumstance.

The anniversary which was devoid of the traditional march past and other such activities that would have been held the Eagle Square, on Tuesday climaxed with a special parade by officers and men of the Guards Brigade at the forecourt of State House with President Buhari as Special guest of honor.

The guests at the independence including Vice President Yemi Osinbajo, SAN, were treated to a synchrony of special rifle and silent military drills and other series of displays by soldiers of the 177 and 7 Guards Battalion respectively.

Former Vice-President to President, Goodluck Jonthan, Arc Namadi Sambo of Peoples Democratic Party (PDP) and former Head of state, Gen Yakubu Gowon, were among the guest that graced the occassion.

Others who attended the ceremony were National Chairman of the ruling All Progressives Congress (APC), Adams Oshiomhole, President of the Senate, Ahmed Lawan, Speaker of the House of Representatives, Femi Gbajabiamila, Chief Justice of Nigeria, Ibrahim Tanko, members of the diplomatic corps, traditional rulers as well as Defence Attaches.

Also at the ceremony were Secretary to the Government of the Federation (SGF), Boss Mustapha, Minister of the Federal Capital Territory (FCT), Muhammed Bello, Minister of Information and Culture, Alhaji Lai Mohammed, and Minister of Special Duties and Intergovernmental Affairs, Senator George Akume.

This was preceded by a release of peogens by the President who was joined by Prof Osinbajo and the Commander, Guards Brigade, Brig General Mohammed Usman, to signify peace and the country’s unity.

The celebration which was the first in President Buhari’s second term lasted for about one hour forty-five minutes. It started around 10 a.m.

President Buhari was ushered to the venue by 9.58am where he first inspected a special Quarter Guard mounted by soldiers at the sentry point.

He thereafter proceeded to the forecourt to receive the national salute which was followed by a rendition of the country’s National Anthem.

Prof Osinbajo was earlier ushered to the venue around 9.50am.

Since 1st of October, 2010 when the anniversary celebration witnessed bomb blasts at the Eagle Square, Abuja, the administration of former President Goodluck Jonathan had marked all subsequent anniversaries under his administration in Aso Rock.

But the Buhari’s administration broke the jinx by marking the 58th Independence Anniversary last year at the Eagles Square, Abuja.

Secretary to the Government of the Federation, Boss Mustapha had announced that the 2019 independence anniversary would focus on youth and as such programmes like 59th Anniversary Youth Entrepreneurship Empowerment Programme and Youth concert were held during the period of celebration which commenced with media briefing last week.

#NigeriaAt59: Nigerians must be optimistic for greater things ― Lai