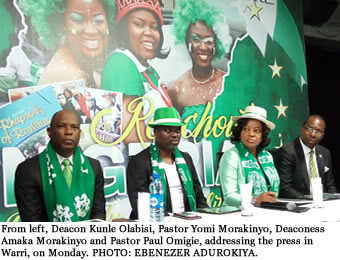 President of Christ Embassy worldwide, a.k.a Believers Love World, Pastor Chris Oyakhilome, on Monday, said only the word of God can bring the desired change Nigerians are longing for.

He disclosed this during a press conference at the zonal headquarters of the church in Warri, Delta State, to flag off the October 2016 Independence Anniversary Reachout Nigeria.

The cleric, who was represented by Pastor Yomi Morakinyo, Dcs Amaka Morakinyo and Pastor Paul Omigie, noted that only the transformation of the mind through obedience to the word of God could bring actual change to the country.

According to the man of God, the church is catching in on the 91.21 million users of the Internet in the country to embark on Rhapsody Digital Revolution to distribute 600,000 copies of Rhapsody of Realities as well as 13 million hard-copies to Nigerians in October.

Speaking on the potency of the word of God to bring change to the country, he said: “We believe the word of God is the most powerful change agent, and has the power to positively change the life of anybody who receives it with faith.

And this is one of the key reasons why we celebrate our great Nation Nigeria, with the free distribution of the Rhapsody of Realities every year.

We desire for the message to impact the governance of our nation positively, especially as we look forward to lasting solutions to the prevalent socio-economic situation in our Country.

We believe in the unending possibilities for greatness in our nation, through the influence of the Word of God and the Holy Spirit of God.”

Oyakhilome added that within the last three years, the church in Warri had returned no fewer than 60,000 street urchins to schools.

He disclosed that Rhapsody of Realities, tagged the Messenger Angel, had been translated into no fewer than 796 languages globally, adding that as of September 30, the daily devotional had become the second most widely translated only after the Holy Bible.

The cleric concluded that October Reachout will witnessed the establishment of a skills acquisition training centre for the female inmates at the Okere Prisons, Warri, and a Food Kitchen at Inner City Locations in Warri and environs to feed 3,000 to 5,000 children as well as provide medical care to the indigents of the locations.