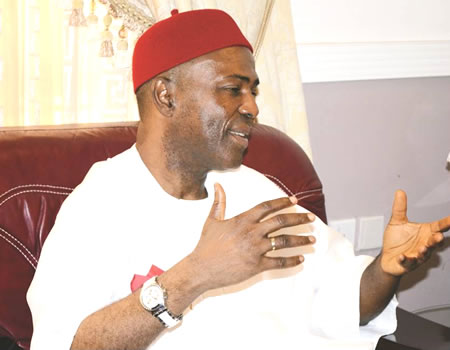 WITH the various sciences, technology and innovation policies evolved by the Federal Ministry of Science and Technology, Nigeria will soon produce Noble Laureate in the sciences.

He spoke while receiving the report of the establishment of the NSTM in his office in Abuja.

Dr Onu said that the idea behind the Museum was to encourage the involvement of the Nigerian citizenry, especially youths to re-orientate their mindsets towards imbibing science and technology as way of life..

He noted that the museum was a unique project given the fact that if the project was utilised, it would serve as a catalyst for scientific and technological development of Nigeria.

The minister said that the ancestors understudied and understood their environments which culminated in their domination of territories and kingdoms to produce artifacts such as Ife Bronze, Nok culture, Benin historical walls and artifacts and Igbo-Ukwu artifacts through their creative deployment of science and technology.

Dr Onu noted that the museum is a unique project given the fact that if this project was utilised it would serve as a catalyst in the process of technology and innovation development in Nigeria.

He encouraged Nigerians to key into the museum project especially at the state level, as this would enable the youths to utilise and deploy science and technology for sectoral development of our nation.

Dr Onu, therefore, commended the committee for its hard work and commitment in delivering the reports within the stipulated period.

Earlier, the Chairman of the Committee, the Director of Science, Technology and Promotion in the Ministry, Mr Ekanem Udoh, told the minister that the museum, when completed, would incorporate the Science and Technology Innovation (STI) of the nation’s ancestors in a manner that would showcase they understood their environment and would also help the youths to have hands- on knowledge of natural phenomena and important scientific and technological events.

Ministry to use scientific innovation to boost food security