Nigeria: We can only access 1.8m IDPs, UNHCR says, as Daystar donates N10m to support victims 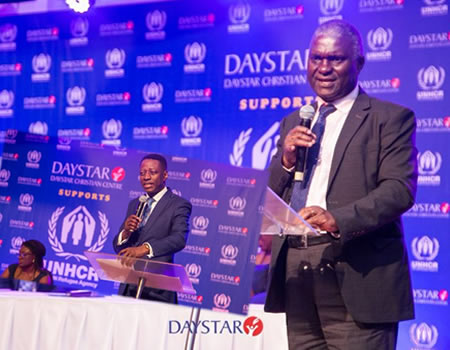 United Nations High Commission on Refugees (UNHCR) Country Representative to Nigeria and Economic Community of West Africa (ECOWAS), Mr Antonio Jose Canhandula, revealed on Tuesday in Lagos that of the over 2.8million Internally Displaced Persons (IDPs) in Nigeria, the organisation could only reach and assist about 1.8million of the affected.

Canhandula made the disclosure, while speaking during the donation of N10 million cheque by Senior Pastor Sam Adeyemi of Daystar Christian Centre to the UNHCR to be used for the care of the IDPs across the country.

According to the UNHCR chief, the challenges faced by the body in reaching out to the affected has to mainly with security, saying there was need to ensure one’s security and that of staff of UNHCR who would be involved in such exercise.

“The challenge is first of all security, because to be able to help, you need to survive and the first thing is to make sure that my staff are secured when they go to assist. That security means that access to the population is not that easy.

“It is a very difficult situation. This is because of the so many Internally Displaced Persons, we only have access and could assist 1.8million,” he said.

Canhandula said there were some local governments in the North- West, including Borno and Adamawa states where UNHCR could not have access, disclosing that he later learnt he was the first UN officer to visit Mubi South, North, Madagali and Michiga in Adamawa State.

“There are some local governments in Borno State for instance that we do not access. That is not limited to Borno State. In Adamawa State, I have been able to go to Mubi South, North, Madagali and Michiga and I was told I was the first UN officer to visit.

“There are people there; they do not have a school, roof over their heads, the women are trying to find something to take home for their children, but they cannot,” he lamented, describing the negative impact of the crisis as unquantifiable.

According to him, if a child was five years, when the crisis started 10 years ago, the child would be 15 years now, and being denied of opportunity to go to school.

“It means we have a 15- year-old who have not been to school. What future are you actually looking at when you look at that child?” Canhandula queried.

The Senior Pastor of Daystar Christian Centre, Pastor Sam Adeyemi, said the donation was a product of working inline with the instruction of Jesus that asked that the church should care for the poor.

Adeyemi also said with the donation, the church hoped to help reduce the statistics of the Internally Displaced Persons (IDPs) and refugees in the country, even as he promised that the partnership between the church and UNHCR would be ongoing to make impact across the world.

“Daystar considers it a privilege to partner with the UNHCR in solving the problem of internally displaced people and significantly reducing the statistics in Nigeria.

“We hope this partnership continues and wish to give our support to UNHCR mission even in the global world,” he said.

Olubadan to High Chiefs: Remove your ‘illegal’ crowns and return to palace

NEMA rallies support for Presidency, DG in fight against insurgency