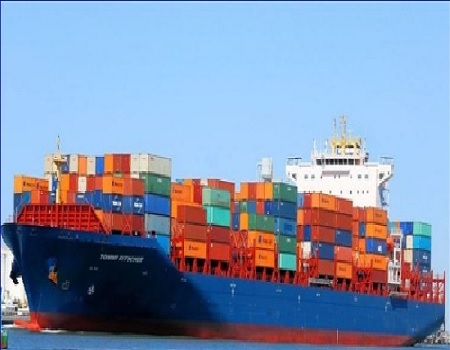 The Nigerian Navy, in the early hours of Monday, dispatched a patrol boat, NNS OSE to rescue a Portuguese flagged container ship, TOMMI RITSCHER which had come under attack by pirates in the Gulf of Guinea (GoG) on Sunday.

In information released by Dryad Global on Monday, the Portuguese flagged container ship, TOMMI RITSCHER which had Russians, Ukrainians, Bulgarians and Filipino’s on board, was attacked in the early hours of Sunday 19th of April 2020, with the pirates boarding her and holding eight of her crew hostage within Cotonou Anchorage.

According to Dryad Global, “Report indicates that the Portuguese flagged Containership TOMMI RITSCHER is currently involved in an ongoing incident at Zone 3 Cotonou Anchorage.

“It is understood that the vessel was approached on Sunday by a speedboat and subsequently boarded by an unknown number of armed persons.

“A Naval Patrol vessel (ZOU) is understood to have spotted the speedboat alongside the vessel and approached, thereby forcing the speedboat to flee but leaving the perpetrators on board the TOMMI RITSCHER.

“The remaining eight crew are currently believed to be held onboard the vessel.

“Further report indicates that in the early hours of Monday, 20th April, assistance had been sought from Nigeria who is understood to have dispatched a Nigerian patrol boat NNS OSE with a detachment of Nigerian Naval Special Boat Service arriving at 2030hrs.

“It is understood that the situation is ongoing and eight crew members of the vessel remain hostage onboard the vessel.

“This the second incident within the Cotonou anchorage within 2020 and the 5th incident in this location across a 12-month time frame. Whilst the full details of the incident remain unknown, incidents within the anchorage area have predominantly been limited to suspicious approaches and boardings for the purposes of petty theft. The waters off Cotonou and neighbouring Lomé have witnessed a number of more serious incidents involving the kidnap of the crew at a distance of between 40 to 150 nautical miles within the Gulf of Guinea.”