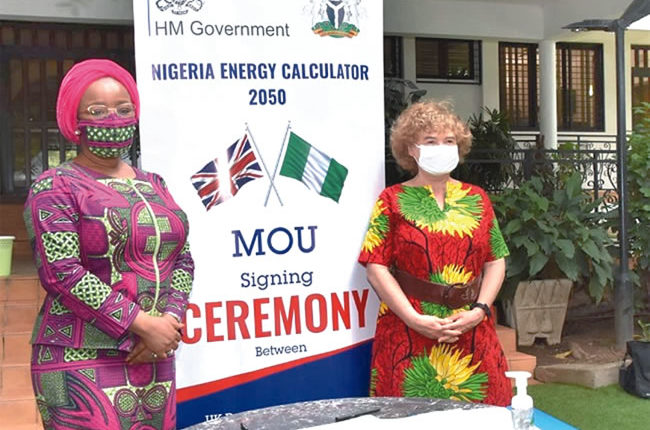 The British High Commissioner to Nigeria, Her Excellency Catriona Laing and the Honourable Minister of State for Environment, Sharon Ikeazor, on Tuesday, signed a Memorandum of Understanding (MOU) between the United Kingdom Department for Business, Energy and Industrial Strategy (BEIS), Energy Commission of Nigeria (ECN) and the Federal Ministry of Environment.

According to a release from the British High Commission, the purpose of the MOU is to strengthen and co-ordinate the UK Government’s efforts to support Nigeria to develop an updated version of Nigeria’s Energy Calculator using the experience of other countries around the world. The proposed implementation period is May 2020 to October 2021.

The UK Government, with support from academia and the private sector, developed the 2050 Calculator model in 2010 as a way to consolidate the evidence base to inform its low-carbon transition.

In 2013, the Department of Energy and Climate Change (DECC), now known as BEIS, through the British High Commission to Nigeria, supported the ECN to adapt and produce the initial phase of the Nigeria Energy Calculator 2050 (NECAL 2050), which the Federal Government launched on 28 October 2015 with the UK Foreign Secretary’s Special Representative for Climate Change.

BEIS is supporting Nigeria to develop the 2050 Calculator and is working closely with the Foreign and Commonwealth Office (FCO) and its delivery partner – a consortium led by Mott MacDonald, Imperial College London, the Federal Ministry of Environment and ECN – to implement the project.

Nigeria’s NDC pledges to reduce greenhouse gas emissions. This will be most effective if based on the best available science, with strategies continually based on new evidence, which is what the 2050 Calculator provides. As both countries recover from the COVID-19 pandemic, the UK will be working closely with Nigeria to ensure efforts to reduce emissions are successfully delivered.

Addressing attendees as she opened the MOU signing ceremony, the British High Commissioner said: “The development of the 2050 Calculator further strengthens bilateral collaboration on climate change issues and encourages a strong and progressive Nigerian voice in the run-up to COP26, which the UK looks forward to hosting in 2021. We are keen to work closely with Nigeria to deliver the ambitious deal needed to avert the dangers of climate change – success is in our mutual interest.”

Ikeazor, Minister of State for Environment said: “The Nigeria Energy Calculator 2050 tool offers an opportunity for policymakers, academia, civil society organisations and the private sector to engage on enhancing sustainable energy pathways in Nigeria. I hope that collaborative efforts between Nigeria and the United Kingdom will continue to yield positive results for the achievement of a climate-resilient and a green growth path for national sustainable development.”