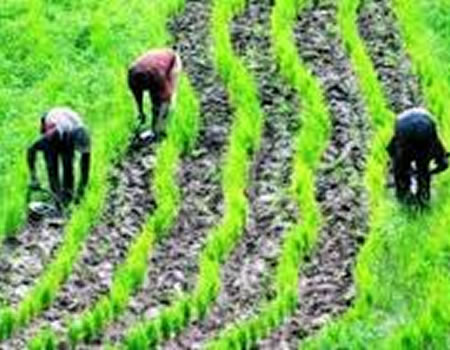 THE Minister of Agriculture and Rural Development, Chief Audu Ogbeh has said that Nigeria’s rice paddy production has increased thereby leading to the reduction in rice importation by 95 per cent in the last three years.

Ogbeh stated this in Abuja while speaking on the achievements of the sector in the last three years.

He said the increase in paddy production also led to the Government saving about 5 million dollars per day.

He said Nigeria is currently producing 5.8 million to 6 million tones of paddy rice and the number of paddy farmers in the country has risen from 5 million to 12.2 million and by the end of this planting season the number will increase to 9 million tons per annum by 2019.

The Minister further noted that aside from the impact of the rice revolution there are other sub-sectors of Agriculture like maize, sorghum, millet, cassava and yams that production has increased in the last three years thereby contributing to the growth of the economy.

“Today Nigeria is the largest producer of maize in Africa, 10 million tones and this is according to the International Institute of Tropical Agriculture, we are the second largest producing in sorghum and the third in Millet, we are still leaders in yam way above everybody else because nearly 66% of all the yam in the world are grown here and we are now putting a foot in the international trade in yams…. We also leaders in cassava but we are not doing well enough in cassava processing and value addition and we are number 4 in cashew nuts out of which we earned 700 million dollars this year”

He said the biggest applause in the agricultural revolution in the country is Nigerians themselves who heeded President Muhammadu Buhari’s call to return to the farms particularly women and youth.

“the biggest news probably is what Nigerians have done for which we remain eternally grateful , the response of Nigerians to the call by the President to return to agriculture is unparallel particularly among young people, the youths are everywhere getting involved in agriculture youth who before now had no interest in Agriculture because it was a drudgery and wasn’t attractive”

He added that a time will come in this country when Politicians will not find people coming to their houses to beg for handouts but the politicians will have to go the farms to beg farmers and convince them to leave their farms and to attend political rallies.