Nigeria on threshold of greatness with Buhari, Osinbajo ― Ambode 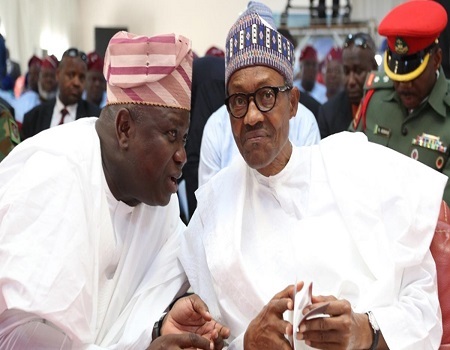 LAGOS State governor, Mr Akinwunmi Ambode on Thursday said Nigeria is already on the threshold of greatness with the duo in the next level government.

This was just as Governor Ambode hailed the role played by National Leader of All Progressives Congress (APC), Asiwaju Bola Tinubu, in the re-election of Buhari and Osinbajo in the last presidential poll.

The governor made this remark at the 11th Bola Tinubu Colloquium held at the International Conference Centre, Abuja as part of activities marking the 67th birthday of Tinubu, saying it was gratifying to note that the next level promised by the APC government was already unfolding, while assuring that the next four years would engender massive development and service to the people.

The colloquium was attended by President Buhari who was represented by Vice President Osinbajo, governors, ministers, members of the National Assembly, royal fathers, political leaders, captains of industry and members of the diplomatic corps, among others, while several presentations were made by government officials and representatives of the private sector.

“We are all expectant and we can feel the next level unfolding. Our country is on the threshold of greatness because for the first time since our independence, we would have successive administrations of a progressive and visionary government; a government of integrity, a government whose sole interest is the well-being of Nigeria and Nigerians.

“We are lucky to be here in this exciting time; in a time when our country will be led by selfless individuals who have the progress and prosperity of our people as their major objective and we are here today because Asiwaju Bola Ahmed Tinubu has been a very key part of this story.

The governor, who attended the colloquium with his wife, Bolanle, particularly hailed Tinubu for his political dexterity, doggedness, undoubted courage and political acumen, saying the attributes of the APC national leader played a key part in the electoral victory of the party at the Federal, National Assembly, Governorship and State Assembly elections.

Governor Ambode, while describing the theme of the colloquium: “Next Level: Work For People,” as perfectly conceived and apt for the moment, said it was instructive that it was coming at a time when Nigerians were eagerly looking forward to revolutionary transformation in key sectors and sections of the country.