Nigeria no longer a federation — Shonibare 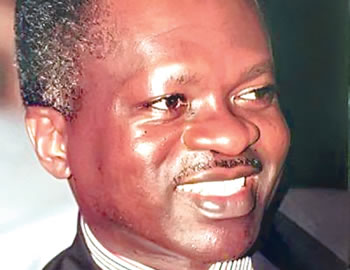 Chief Supo Shonibare, a core apostle of the sage, Chief Obafemi Awolowo, is a legal practitioner and leader the pan-Yoruba organisation, Afenifere, in Lagos State. In this interview with KUNLE ODEREMI, he  speaks on the parliamentary and presidential systems of government, the 2014 national Conference, among other issues.  Excerpts:

With the benefit of history, what do you think is wrong with us that we are unable to recreate the successes that were recorded in the First Republic?

It is curious that some of us still have some difficulty in analysing the challenges facing our nation and the South-West without conceding what should now be obvious to all of us, taking a cursory look back at our systems and practice of different types of political systems since 1951, that the underling fault line is our departure from regional government and an autonomous Federal system of government. The structure and the systems practised for a majority of that period till today is incurably defective. A federal autonomous system was the basis and the foundation of the accord concordial among our founding leaders, ushering in an independent entity and accepting the notion of initially being a federation, then later a wholly autonomous Federal Republic of Nigeria.

The military, being themselves an organisation run as a cohesive, unitary outfit, facilitated a system consistent with their own life experiences. They balkanised and weakened the regions evolving them into several states formation,  as well as enacting decrees which in effect took over some exclusive enumerated powers, as well as residual powers that had been vested in the regions. The Military in 1966/67 was dealing with succession of Eastern Region from the Federation. The initial creation of Mid-West by the Balewa administration without creating regions from minorities in the Middle belt, or the East, was intended to reduce the support base of the opposition Action Group which had championed the creation of more regions. The creation of 12 states by the Gowon regime was both to weaken the concept of the secessionist enclave being monolithic, as well as to weaken the federating units for the emergence of a stronger centre. Although we were still continuing to call ourselves a “Federation,” in reality we are no longer a Federation.

A federation implies an agreement between several states, ethnic nationalities or settlements, intending to found a nation for their collective well-being and protection. There was no agreement after Independence abandoning the Independence constitution. The elite and the military simply imposed a constitution on us that was not autonomous. It didn’t not derive its powers from “bottom up” or from a prior conferment of democratic legitimacy on the process by the ethnic nationalities or settlements initially determining the powers it is willing or able to cede to the centre and enumerated powers and residual powers for those federating entities or settlements. The military determined the federating units. States were simply created and more have been subsequently created by fiat.

However, it was opined upon the convening of the Constituent Assembly before the advent of the Second Republic that the presidential system of government would be better suited for the country- the military by this time having balkanised the regions into states, so the presidential system of government was accepted by all the political leaders at that time.

A lot of Nigerians are still nostalgic about the regional era…

Why is our most nostalgic recollections of accountability in governance and the most prudent application of our resources in a democratic dispensation the period between self government in 1951, Independence in 1960 and 1966 when the civilian government was overthrown? Was it a coincidence that the system we operated at that time were the regional governments and the Parliamentary system of government? I think not. It’s the system best suited for us. We do not have the cohesion, even development, maturity and the connectedness required for a non-homogenous group to confer powers akin to those exercised by a monarchial entity as the powers the presidential system confers on the president and governors.

The governors however do not give the local government chairpersons the leeway to exercise these powers, knowing the potentially abusive nature of such powers. A president or governor in a parliamentary system is a leader among equals- a First Minister. In a presidential system, president or governors are kings. The American settlers introduced it because all they knew was a monarchy. They wanted a democratic monarch. We already have our traditional rulers.

There are no constitutional precautions in changing a president in a parliamentary system of government. Parliament simply votes and government continues for the tenure of that parliament with the person leading the party surviving the vote or a new Leader emerging and carrying on as new Leader and President, or a coalition of parties electing a president by majority votes. It does not create a vacuum or a constitutional logjam. It will be more cost-effective for our polity. I am yet to find any attribute that the presidential system has that cannot be made to operate in a parliamentary system.

Again, while the creation of states as a level of governance has brought rapid development using another level of government closer to the people to exercise the executive and legislative functions of governance, that development could have well been achieved and even surpassed within the regional government. Indeed, there is no template that can be said to be of general application in the creation of states. It’s this challenge that informs the ever-increasing agitation for the creation of more states, whether potentially viable or not, by several homogeneous settlements and minority groups.

The dysfunction of a unitary system in a nation that is not homogeneous is that it will always ignite a fault line out of any action, omission or decision that may seem advantageous to the majority group or groups and label them- rightly or wrongly, as being unfair and discriminatory. It tends to fan instability and the embers of persistent discord, friction and disunity. Indeed, a unitary system of governance can be said to be undemocratic as the minority groups will be perpetually unable to own ownership of the decisions that may have the greatest impact on their daily life choice issues.

They will be in perpetual opposition; unless power is ceded to them by the benevolence of the majority group or groups. Indeed, I do not know of any country consisting of several ethic nationalities practising a unitary system of government. They all practise a federal system of governance with the various nationalities or settlements constituting the federating units. They would determine the powers to be ceded to the centre for their collective well-being and protection.

There’s no doubt that there’s an economic advantage in our national entity, but that advantage can only be appreciated and harnessed by the solidarity of willing participants who are also able to determine their own destiny and governance in a manner that would hold those governing them solely responsible for the success or failure of policies.

As there was no template of general application for the creation of states, the six geopolitical zones are most certainly viable entities capable of being our federating units. They should be our new regions. They are composed of the majority groups in three of these zones and the minority groups collectively in the other three zones. Each region will have it own constitution which would contain enumerated and agreed powers the various nationalities or settlements in that region have agreed to cede to the regional government while the residual powers will be exercised by the states.

What role can the report of the 2014 National Conference play in all these issues?

The present administration, maybe after it has been able to achieve some stability in addressing the economic and security challenges of our country, will find that the structure of the country itself is a major fault line and a hindrance to our achieving inclusive development and sustaining a stable nation. Although the resolutions and decisions of the National Conference of 2014 cannot be the ultimate panacea in resolving our structural and economic challenges, it’s a good beginning.

It’s a good beginning precisely because it was able to achieve the feat of adopting these resolutions which entail some degree of devolution of powers to the states by consensus. The present government- being both the Presidency and the National Assembly, will be better advised to evaluate and consider these resolutions; they address some of the government’s current social and economic challenges.

Quote me, I am the owner of Yorubaland —Olugbo

Durban: City where women were excluded from Eid prayers

We are with you in your suffering, Fani Kayode tells Southern Kaduna