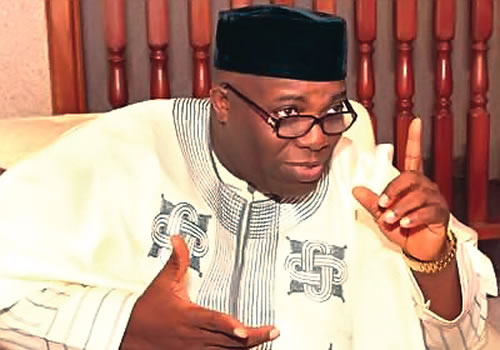 A former presidential Adviser, Dr Doyin Okupe speaks to KUNLE ODEREMI on the economy, his presidential bid and other multifaceted challenges confronting the country.

What are your perspectives on the state of the nation?

Even to a child, or a blind person, the country is not where we want it to be. That is the truth. As an aspirant, I am not out to apportion blames, because whatever happens to Nigeria, there is no way you can divorce cumulative issues, cumulative structural issues. Be that as it may, certain things come out very, very strongly. One, insecurity. In the sixty one years of Nigeria’s existence, we have never come this close to an unmitigated disaster, where no one, nowhere is safe. That is a major problem. When you now look at the connecting effects of insecurity – farmers cannot go their farms nationwide, children cannot go to school in certain areas of the North. These are not very desirable things. There are moral issues and there are social issues, most profound of which is food security. Because there is so much insecurity. There is a drastic reduction in production capacity and capabilities. Agriculture is suffering seriously, therefore there is less food to feed our over 200 million population, which in itself is a potential time bomb. Way back in 2015, if someone had N500 million that was a lot of money because the Dollar was less than N200, but today, the value of N500 million has gone down precariously because the US Dollars is almost N600. Without you facing financial catastrophe, your money has gone down seriously. So, you can see that even the rich have become impoverished, and that is the wealthy man, not to talk of the downtrodden. We used to joke in those days that people ate 1-0-1; now you can no longer eat.

Are you not surprised given President Muhammadu Buhari’s pedigree and exposure as a former head of state?

Ok. I was saying categorically that the issues that emanated during the era of this regime, either because of either their errors of omission or commission have definitely become so overwhelming. They cannot handle them. It was important to put all hands on deck to find a solution to the problems, bedeviling our country, but that has been ignored. That is not an issue now. I give you an example. The budget for 2022 is N16.39 trillion which is just a little over US$26 billion. In 1982/83, President Shehu Shagari’s budget was US$25 billion. We must be joking, if we think Nigeria will work under these circumstances. 1983 till now is over 35 years. When our population was half of what we had now, our budget was 25 billion Dollars which was not hundred percent satisfactory at that time. So many years after, with a population more than double what we used to have, we are still having a budget of 26 billion Dollars, so what can the government do? Tell me, what can the government do? Nothing. We have got to expand the revenue base of the country and without that, there is no hope. That is why the Buhari administration keeps borrowing, borrowing and borrowing. It is because we are not generating enough money for this type of country to survive on. It is like when you have a wife and four children, you can cut cost, but if those kids are in school and they are paying hundred thousand each per term, which means you almost need hundred thousand per month, for school fees alone. Meanwhile, you have to eat, pay electricity bill and so on. It means you are in trouble, if between you and your wife what you are making is N150, 000 per month. That is the situation in which Nigeria is. There are compulsory expenditures that must be done like recurrent expenditure. Recurrent expenditure is about seventy percent of our national budget, then we are doing debt servicing with is about ninety percent of our income. All these things are incongruous, even if you bring the world’s most celebrated economist to run Nigeria. What Nigeria needs basically is more money, so how do we get that? If you can’t get that, you are going nowhere.

But the APC came with a beautiful manifesto, what went wrong?

The APC was like a political special purpose vehicle which was hurriedly put together in order to dismantle and defeat the incumbent which had its weak areas which they exploited. The incumbent had issues like insurgency which they exploited. The economy was not bad at all. The economy was fine. We were the largest economy in Africa and we were doing a five hundred billion Dollars economy every year. The APC till today is not a well harnessed political party. It is not, and that is what the basic problem of APC is. Anytime you pour it out like water, it separates into various factions – Action Congress of Nigeria (ACN), Congress for progressives Change (CPC), the All Progressives Grand Alliance (APGA), and so and because of that, they can’t pull together as a party. They have no capacity to confront the issues and they did not prepare for government. For a country with severe socio economic problems, that kind of platform cannot help us.

With the scary scenario you have painted, why are you running for president?

Because I know what to do. I have diagnosed the problems because of my closeness and residual knowledge of what goes on in the presidency. I also have an idea of what goes on internationally. If I put all these together, I can find a solution. I do not want to bring out all I want to do to the fore yet, because it is a competition, because if you publish what I said now and somebody says the same in another newspaper in six months, it becomes a debate about whose original idea it was. But let me say that a US$26 billion budget is far too low, I will within one year take steps that will double the national income. If you double the national income you won’t need to borrow, you will have more money to service our people. Mind you, apart solving the issue of insecurity, I am coming to government to make issues that concern the people a major priority. I am going to spend one third of the budget on the people’s welfare. The money and the wealth of the country should be spent on the people. Many of these high faluting infrastructure projects are drain pipes. They make money for top civil servants, people in the presidency, ministers, and legislators. Eighty-five percent of what we spend in our national budget goes abroad. I can afford to divulge a few things for credibility sake. We have very serious health issues in the country, may be because we don’t have enough funds in the budget for the health needs of our nation. People are dying in millions because they cannot afford hospital fees, even in my own little town of Iperu, you hear this one has died, this one has died and they are not really very old people. I had cancer of the prostrate fourteen years ago, and I am still living. I am cancer free. I spent twenty thousand Dollars to get treated by a special machine called cyber knife. It does not exist anywhere in West Africa. What is the cost? Nothing. Between five and six million Dollars will save lives, but who will bell the cat? Who will bring this money out? These are the things I want to do. I am going to stop poor people from dying from simple illnesses that can be prevented or that can be treated.

You have not been an elected governor or senator, don’t you think that is a minus for your aspiration?

Tell me, governor of where was Obama? Macron was governor of where? It’s a function of commitment, vision and intellect.  People who call themselves governors, what did they achieve? Blowing siren everywhere and Excellency? Many governors, after eight years, what did they achieve? How can been a former governor be a qualification for presidency? It is idiotic. It can only happen in a mushroom country which I hope Nigeria is not. You must assess a man by the muscle of his intellect, his knowledge, his exposure and his experience. Obama was never a governor of any state, he was a senator. Macron was actually a member of a sitting government, he moved out of that government and in seventeen months became the president of his country. All these beer parlour talks are mundane. I hope nobody will talk to me about such things. Having made a mistake in 2015 and 2019, Nigerian should know better now.

Don’t you think your idea of ending insecurity in two years is a tall ambition?

It is very, very possible. And it is also based on knowledge and experience. I was there at the very beginning of this insecurity, at the end of OBJ’s administration. I was also there when it got to a peak, during Jonathan›s administration. I know what gains were made and I know what errors were committed. I also know what the challenges were. As president, I will internationalise the war against insecurity. Nigeria is not capable of defeating terrorism on its own. I have researched it from 1920’s till date, whether it’s Vietnam, whether it’s Iraq, whether it’s IRA, the minimum number of years to end insurgency is twelve years. When America was going to Baghdad, they have money, they are a Super power, yet they recruited Britain, European Union, Saudi, etc. They brought in a coalition. That was why within a year or two, the matter was resolved. We need to set up an African High Command of 25,000 to 30,000 troops.

Your party has witnessed a gale of defections in recent times; is the platform strong enough to battle the APC in 2023?

I am a politician of forty years and more experience. Gale of defections don’t mean nothing and I can prove it to you. Between Buhari and Atiku Abubakar in 2019, total number of votes was about thirty million or there about, how many defections can create one million votes? Defections are for personal aggrandizement or personal placement, improving your lot politically. It has very little impact on the voting population. If Nigerian voters believe in you and your vision, if your party has just a municipal support, they will put you in power. In 1999, the South-West did not vote for Obasanjo, but by 2003 almost all the South –West governors were tumbled. That is the power of the electorate who believe in a candidate.

As stakeholders take stock of Osun at 30