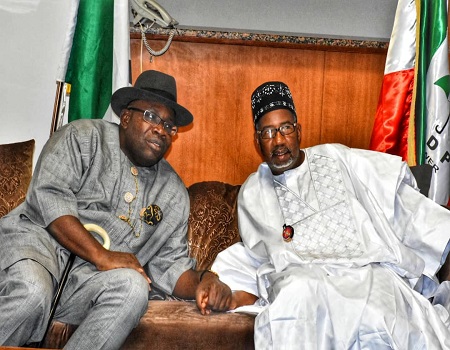 Bayelsa State Governor, Seriake Dickson has lamented that what is happening in the country now can best be described as “civilian coup d’etat rather than democratic governance”.

Seriake Dickson while speaking in Bauchi on Tuesday stressed that “with what is happening in the political scene of the country, we have no option but to say that the former President Goodluck Jonathan has been vindicated when he made a similar submission about the political situation of the country”.

The Bayelsa state Governor who was in Bauchi on what he described as a ‘thank you and congratulatory visit’ to Bauchi State Governor, Sen Bala Mohammed Abdulkadir declared that the what happened in Bayelsa and Kogi states can best be described as a charade which must be condemned in totality.

He added that going by majority of the reports given by Domestic and International Elections Observers, the declared outcome cannot stand the test of time expressing the resolve of the PDP to challenge the result at the Tribunal.

The Bayelsa State Governor further said that nothing will be left undone to ensure that the PDP retrieved its mandate which he said was massively given to it by the people of Bayelsa state.