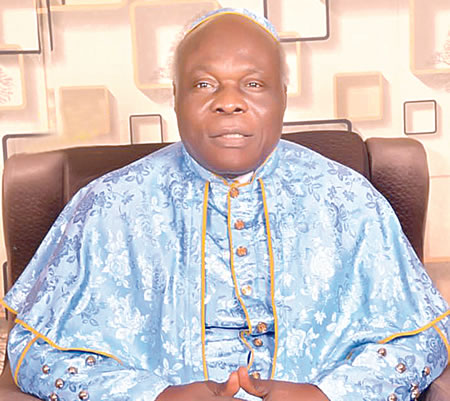 Reverend (Dr) Emmanuel Adetunji Adeonigbagbe, the Spiritual Head, Celica Church of Christ Worldwide, Ibadan, Oyo State, has been in evangelism for decades with almost a cult followership all over the world. In this interview by BODE ADEWUMI, he speaks about the Church and the coronavirus pandemic, among other issues. Excerpts.

What is your take on the current pandemic and economic situation in Nigeria?

Generally, the problem of Nigeria is that our leaders don’t count or appreciate the power of the spiritual realm. They only appreciate people in academics or people who are influential. But these people are not even in the spiritual realm. We have three types of pastors in Nigeria, even globally. We have those who are called, that is, the prophets. Even in the Bible, it’s the prophets that speak to the world, not the pastors. But in Nigeria, we have three types of spiritual leaders — we have the pastors who just go to theological school to become pastor.

Sometimes, some of them may have money to build churches or to evangelise. That doesn’t mean they are called or they have the power to speak from the mouth of God. In this particular church, the Celica Church, we’ve sent a lot of messages to the world, at least since 1992. This particular year, 2020, God revealed many things to us and we passed them to the social media and to the people concerned, both in Nigeria and globally.

From our predictions this year, we saw what is happening now because God had spoken about it. That is why Celica is not moved. Our members are allowed to move anywhere they like because we’re protected. God has told us what to do before this thing started and we’ve done it. We believe that God spoke to us when it had not happened and that God that gave us the solution towards it will protect us. This is our own submission this year: That China will have crisis and it will affect the whole world. And that’s what’s happening now. It is affecting the whole world.

In 1992, God told me there should not be a presidential election until 1996, that if we had an election before 1996, there wouldn’t be peace for 10 years in the country. But one year for God is million years. That is the political crises and problems we are still facing till date. But our leaders wouldn’t listen. When God tells somebody this is the way out, you have to call that person, though he may not necessarily be on the committee, but let him guide us on what to do. When we said that there shouldn’t be a presidential election in 1992, God said we should have a framework. The framework was that there’s going to be a head of government who is a civilian spiritual council, then traditional council.

At the top there would be a ceremonial president who was going to be a military officer, but will have nothing to do. But, at that time, we told [Ibrahim] Babangida that he shouldn’t be the person. That brought the interim government. Instead of him to call the person to organise it on his own and you see how he failed. That’s our problem in Nigeria. When they are not in power, they are very nice people; but immediately they get to power, I don’t know what normally gets into their heads. When they enter Aso Rock or state house, they are another thing entirely.

This pandemic or coronavirus came because God wants to level everybody by telling us we are the same. Whether you are a president or governor or civil servant or pastor or prophet, we’re the same. It’s just a simple virus, but everybody is panicking. When the wrath of God comes, where would we be? That’s the problem. The problem is that the leaders are not sincere. I don’t see any leader, any political leader in Nigeria that is sincere.

So, what are you suggesting now?

What I am suggesting is that God hasn’t waged war against us. We are waging war against ourselves. What God told me in 1992 would have been an appropriate solution — that there should be a spiritual council, which would comprise both Christian and Muslim scholars. I do not mean the intelligent people or the graduates or the big churches. I mean the prophets of God.

We have prophets of God in Nigeria. God spoke to us about 10 years ago and it’s still manifesting today. Government should showcase real prophets in Christianity and Islam. They know them. But because these people are not influential, they don’t bother. If they can gather them together to pray, for example, if government has any programme they should gather these prophets to pray and put it before God before starting it. There is no leader who doesn’t want to do good, but we are in spiritual bondage in this country.

They can take their problems to the government. It’s because people don’t know how to reach the government, that’s why many things, many crises happen in Nigeria. In Nigeria today, there’s no system. The system has collapsed. Few people are holding Nigeria to ransom. And the only way God can intervene is through this spiritual council.

What steps have you taken to join forces with other Christian leaders to curtail the pandemic since its outbreak?

Before they locked us down, if I were in the system when they called the Christians and the Muslims and the spiritual leaders together that there shouldn’t be church or mosque programmes, I’d reject it. Why? It’s not about the church or money making. I saw some people blasting Oyedepo, blasting Oyakhilome, that they want the church to continue. But Oyedepo is a rich man. Even if there’s no church again in Nigeria, Oyedepo will still be living. I’m not a rich man, but I’ve children who are capable of feeding me. If I were in that meeting, I would’ve told them that the only thing we can do is to go back to God.

Let’s organise the churches well. Let’s sanitise them. Churches are better organised than markets. Go to the markets and see how they shout. Go to where they’re distributing palliatives and see the thugs. In churches we don’t do that. We moderate what we do in the church. Before the lock down, God had told us in January what was going to happen.

So, we have been praying and fasting. We did that for more than two months before the lock down. We don’t have any gathering again. One thing you should realise about white-garment churches is that we have many people living in the environment, especially in our church here. People, even in the past twenty-something years, are still living here. Will I because of lock down send them back home when they don’t even have where to sleep? Some of them don’t have money to rent houses.

They only reside in the church. White-garment churches are different from other churches where they lock the gates of the churches. In Anglican church — I was once in Anglican church, I was born an Anglican  — it was only Sundays that we went to church, unless we wanted to go to choir practice on Saturdays. If Anglican and Catholic churches lock down, fine. It’s only the vicar that lives there. But many people live in spiritual churches. It’s a community. They live like brothers and sisters. So, this is my own view about what has happened in Nigeria.

Finally, what is your advice to the government of Nigeria?

Nigeria should come back to God. Our leaders should listen to the voice of God. I’ll always repeat this: when there was a war between America and Iraq, America wanted to dominate them from air. They tried all possible best, but they couldn’t win that war until their president went to the church and prayed and asked the man of God what happened. And the man of God said, at so-so time, start ground battle. The ground battle didn’t last for twenty-four hours when Iraq surrendered the fight. So, our leaders should listen to the voice of God in whatever they want to do or in whatever step they want to take. We should now believe we don’t have knowledge. God has shown us we don’t have knowledge. Scientists and economists have failed us. Everybody has failed us. He who is not going to fail us is God.

The conversations on Agboola Gambari