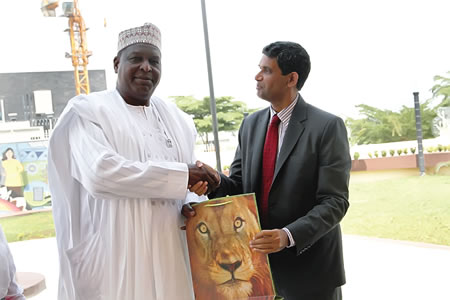 The High Commissioner of India to Nigeria, His Excellency Mr. B.N Reddy has re-emphasised the need to consolidate on the long standing cultural relationship between Nigeria and India.

The envoy made this known while playing host to the Director-General, National Council for Arts and Culture, Otunba Segun Runsewe and his team during a courtesy call to the Indian High Commission in Abuja.

The duo agreed that Nigeria and India shared a lot of similarities in terms of culture, music, history and language stressing that there is need to now fully leverage on these cultural similarities for the benefit of both countries.

During the visit, the Indian high commissioner, took the NCAC team round their premises to visualise the various mosaic artworks on display within the building depicting the rise of India via an artistic rendition of the rising sun.

According to Reddy, the national flower, the lotus placed in the centre with closed buds heralds the promise of the blossoms which symbolises hope for the future just as the tiger and peacock represents their national animal and bird.

He further enlightened the visitors that India had twenty eight states with different languages and culture, saying that they will be explored in the forthcoming cultural event slated for April 28 and May 5, this year in Abuja.

“It is natural that we collaborate with Nigeria who also has a very rich cultural heritage in terms of tradition, music, culture, food and languages.” He, however promise to invite renowned artists from India to grace the occasion.”

In his response, the Director-General, NCAC Otunba Runsewe commended the High Commissioner for his visionary leadership and his vigor towards repositioning the Indian High Commission in Nigeria.

He promised to play vital roles towards reawakening the strong cultural ties between Nigeria and India.

“Mosaic is a great cultural representation which is worthy of celebration. Since 1963, Nigeria and India have always had a formidable cultural collaboration which the new management of the council under my leadership is ready to build on.”