Nigeria in a state of emergency, survival hanging —Bakare 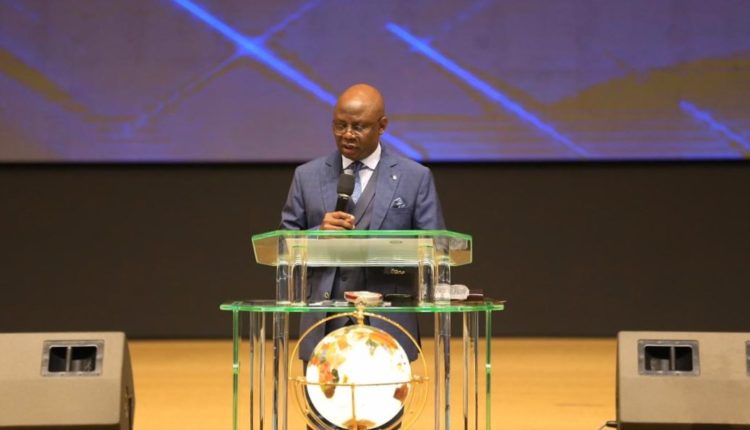 FIERY cleric, Tunde Bakare, on Sunday, expressed concern over the state of Nigerian nation, declaring that the country is in a state of emergency and survival hanging in the balance. He also warned the president that he risked what American experts call the second term curse if he fails to quickly arrest the scourge of insecurity ravaging the country.

In his ‘State of the Nation’, broadcast, with the theme: ‘The Conspicuous Handwriting on the Wall,’ delivered on Easter Sunday, the Serving Overseer, The Citadel Global Community Church, formerly Latter Rain Assembly, said it is crystal clear that the curse is on the horizon.

“If urgent, decisive action is not taken, insecurity may be the second-term curse of the current administration. This is the conspicuous handwriting on the wall,” Pastor Bakare said.

Bakare was the running mate of President Buhari in his second attempt at becoming president in 2011.

“For many years, Nigeria was in the intensive care unit of the universe. However, six years ago, against timely warnings not to overlook fundamental and underlying conditions as the country prepared for the 2015 elections, her caregivers certified her fit and discharged her.

“Those underlying conditions have resurfaced and our nation is now in a critical state. Her survival is hanging in the balance and has been rushed to the emergency room. The diagnosis indicates that a surgical procedure is unavoidable; the longer it is postponed, the more she stands to lose and the longer it will take for her to recover,” the cleric warned.

Speaking against the background of widespread spate of killings, insurgency, banditry, kidnapping, abduction and other forms of heinous crimes across the country, Bakare recalled submitting to the president at the commencement of his first term, the blueprint for national reconciliation, adding that President Buhari had obviously not found a use for the said blueprint.

Speaking on his proposal to the president, Bakare said: “On security, Buhari must intensify the clampdown on terrorism and banditry, by expanding support to the armed forces in terms of technology, armoury, logistics, prompt action on military intelligence, as well as inspirational leadership to sustain the morale of the newly-appointed service chiefs.

“The devolution of policing powers to the subnational governments must be prioritised. State governments must be empowered to form local police forces and to provide cutting-edge training and equipment for these forces.” In his prognosis of the multiple crises bedeviling the country, the cleric noted that “Nigeria has two fundamental problems; one at the level of nationhood and the other, at the level of statehood. The first fundamental problem of the Nigerian nation is the absence of such unifying leadership that can redeem Nigerians from our diverse ethnic and religious identities and integrate us into a common national identity.

“The second fundamental problem of the Nigerian state, is our inability to manage a sustainable and balanced relationship between the centre and the federating units.

“If urgent, decisive action is not taken, insecurity may be the second-term curse of the current administration. This is the conspicuous handwriting on the wall.”

On anti-corruption, Bakare said President Buhari must be guided by the understanding that the war will truly be won, not merely by the force of prosecution, but, more fundamentally, by a national moral compass and the deliberate and strategic integration of the Nigerian people into true nationhood.

“If citizens have a definite stake in their nation, not only will they not steal from the national purse, they will also do everything legal to rid the nation of those elements who seek to sabotage the common good through corruption.

“We need to bring the Nigerian people together into one unifying national agenda. President Buhari may institute, by an executive order, a vehicle in the form of a Presidential Commission for National Reconciliation, Reintegration and Restructuring or Rebirth, however so named, the details of which I have presented to him since the commencement of his first term in office,” he said.

Through racing against time, he believed the administration could still finish well and strong if it will hearken to the restructuring cries. The cleric mapped out his understanding of restructuring thus: “Restructuring does not mean the dismemberment of the Nigerian State. It is not an attack on Nigerian unity. It does not mean disadvantaging any section of the country. Restructuring means empowering the North-West, the NorthCentral, the North-East, the South-West, the South-South and the South-East, so that every part of our country will be safe and prosperous.

“Show me one person who does not want this for our country, and I will show you an enemy of Nigeria. “Unfortunately, the insecurity and instability now raging across the nation are the results of our national failure to act on this truth over the years. Because we have failed to guarantee effective regional governance, a regional governance vacuum has been created. The insecurity in our country is the attempt by regional non-state actors to fill that regional vacuum.

“The greatest demand on the administration of President Muhammadu Buhari is to facilitate the emergence of legitimate regional governance frameworks that can fill the vacuum and flush out the illegitimate structures.

“In the two years left of this administration, the president needs to make an executive decision to approach the restructuring question from a three-pronged perspective targetted at his administration’s three-point agenda, namely; security, economy and anti-corruption.”

He said now, the country is confronted with illegitimate regional actors seeking to hijack governance and control the political economy of the regions; from the Boko Haram terrorists in the North-East to the bandits in the North-West, to the criminal herdsmen in the North-Central, to regional militias in the South-West, to the militants in the SouthSouth and to the secessionists in the South-East. Bakare said Buhari took the oath of office first in 2015, summing up his election campaign promises in three pivotal agendas, with a focus on job creation, but noted that major limitation of the administration had been the failure to appreciate the fact that Nigeria’s problems are more deeply rooted and, therefore, requires a holistic and systematic approach to governance.

“Unfortunately, after winning re-election in 2019, rather than do a deep dive to address the fundamental causes of our national malady by dealing with the root causes of insecurity, corruption and joblessness, the administration of President Buhari decided to treat more symptoms by broadening its agenda. The president’s Next Level Agenda widened the focus from a three-point to a nine-point agenda.

“The re-elected president overestimates his mandate. He ignores opposition and pursues goals that prove to be beyond reach,” Bakare stated.

Bakare, who said he was not condemning the administration’s Next Level Agenda as not important, wants facilitation of the emergence of legitimate regional governance frameworks that can fill the vacuum and flush out the illegitimate structures.

How Buhari can avoid the curse of second term ― Pastor Bakare

Why Customs must remove officers at Nigeria borders