Nigeria can attain sufficiency in coconut by 2030 —NACOPPMAN 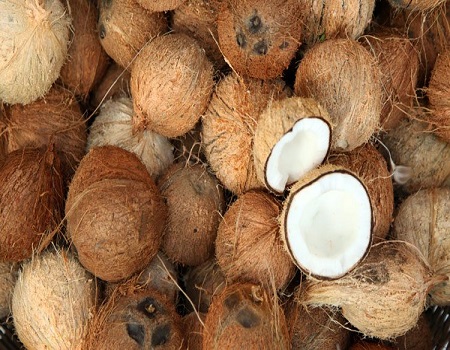 THE National Coconut Producers, Processors and Marketers Association (NACOPPMAN) has said that with the right approach, Nigeria can attain self-sufficiency in the production of coconut by the year 2030.

Coordinator of the association, Jigawa chapter, Hajiya Sakina Muhammad said this during the inauguration of the 2021 coconut planting season.

According to her, coconut is a tropical plant that can grow anywhere under any condition, and Jigawa happens to be among the states in the North where the cultivation of coconut thrives.

Hajiya Sakina said coconut is also a major foreign exchange earner for countries that produce it in large quantities.

She quoted the Minister of Agriculture and Rural Development, Alhaji Sabo Nanono to have said that 653 billion nuts were produced in 2013 and Nigeria currently produces 265,000 metric tonnes.

She further revealed that Nigeria is dwindling in income hence the need to boost the production of crops like coconut to come to the rescue.

“A barrel of coconut oil in the international market today stands at $12 per barrel, while a barrel of crude oil is oscillating between six to seven dollars per barrel.

“Coconut can be a hard foreign exchange earner; that is why the NACOPPMAN decided to come up with the slogan of planting 10,000 hectares per state.

“It is in this regard that the national president of the association, Mrs. Nna Okoji, appealed to state governments to allocate 10,000 hectares of land for the cultivation of coconut so that by 2030, Nigeria can attain self-sufficiency,” she said.

Hajiya Sakina also said that coconut extracts could be used as biofuel for cars, treating cancer, amongst others.

She described the coconut market both locally and internationally as huge, noting that a bag of coconut that sells for N8,000 before the covid-19 pandemic now goes for N25,000.

“Although a typical coconut tree takes five to seven years before yielding fruits, it is an investment that’s worthwhile because once it starts, you will reap the benefits for between 60 and 80 years.

“I have good news for those of you present here today. I am pleased to inform you that the species of coconut we are inaugurating today is the typical Malaysian dream dwarf plant that produces more than 100 fruits in a tree, annually. This variety produces fruits within three years.

“At this point, I want to specifically appreciate the support given to the NACOPPMA by the Federal University, Dutse, Jigawa, Ministries of Works and Housing, Agriculture and Rural Development, as well as the Jigawa Rural Development Agency,” the coordinator said.

She however urged people to invest in coconut farming as it has short and long-term benefits.