Nigeria @ 62 Streaming Nigerian music and how Afrobeats is winning globally

Friday Treat
By ROTIMI IGE and Mayorkun Owojuyigbe On Sep 30, 2022 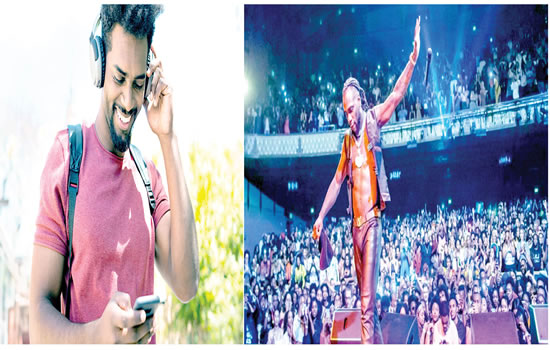 ROTIMI IGE and Mayorkun Owojuyigbe in this report, chronicle the rise of Afrobeats and how streaming platforms have ensured its global reach and acceptance, with attendant revenue increase for stakeholders.

Hundred years after Reverend Josiah Ransome-Kuti first attempted to popularise Nigerian music on London soil in 1922, Nigerian music has taken on a global reckoning and become a welcome guest on global music charts. Currently leading the genre of globally celebrated sounds from Nigeria is Afrobeats, which has taken the world by storm. Today, staging large concerts abroad has become a hallmark of successful Nigerian artistes, whose teeming fans are no longer confined to Nigeria or Africa alone.

Collaborative works within and outside Africa, particularly in the United Kingdom and United States, have drawn the global music audience to the essence of the music emanating from Nigeria. The works of Kanye, Snoop Dog and D banj, P Square and Rick Ross, Grammy award winner, Angelique Kidjo with the likes of Yemi Alade, Burna Boy and Mr Eazi, the collaboration of Davido and Chris Brown, also the more recent collaboration of Ed Sheeran on Fireboy’s ‘Peru’ and Burna Boy’s ‘For My Hand’, among others, are signposts of the ever-rising trend and widespread acceptance of Nigerian music/Afrobeats.

And so, from the ‘Alaba’ days of hustling CDs and mixtapes, Nigerian artistes have become the cynosure on streaming platforms, where most of them have now turned to in promoting their music and staying above the woes of CD piracy. In fact, their presence and acceptance on these platforms are so significant that the music sector in Nigeria is projected to rake in close to one billion dollars by 2023, according to Statista.

Apple Music, Spotify, Audiomack, Youtube, and Boomplay are popular streaming platforms that Nigerian artistes have a notable presence on, with the likes of Wizkid, Burna Boy, Davido, Ckay and Mr Eazi having record numbers on some of these platforms. Friday Treat reported earlier in April that Nigeria was ranked as the country with the second highest number of streams on Spotify, while Ckay, Wizkid, Burna Boy, Tems and Mr Eazi were ranked among the top five exported local artistes on the same platform at the time.

According to the Content Operations and Artiste Services Specialist for Audiomack Africa, Wale Ozolua, “In US, listenership has grown astronomically, up to four times the overall listenership of any other genre. Last year, total music industry streams came to around 988 billion and Afrobeats alone had 2.9 billion streams. In fact, Ckay’s ‘Love Nwantitin’ was number 17 on most streamed songs globally.

“The demographic segment of Gen X, millennials and Gen Z has also helped push Afrobeats via paid subscriptions on social networks while consuming music content. Streaming platforms have also helped everyone to earn; producers, DJs, song writers etc. This is evident in the likes of Pheelz, Young Jonn etc who have become global phenomenons, headlining concerts across the world and helping to push collaborations between global artistes and Afrobeats stars. Now, most artistes around the world want collaboration with Nigerian stars and have helped to push the culture”, he said.

The success of Nigerian top artistes at world concerts is another testament to the growing popularity of Nigerian musicians outside the shores of their country. Just last week, Tems, Tiwa Savage, Pheelz and Oxlade etc shut down the Global Citizen festival in Ghana while Burna Boy took over South Africa. The likes of Davido and Wizkid have held sold-out concerts at the 20,000 capacity O2 arena in London. Wizkid became the first Nigerian artiste to sell out the venue in May 2018 when he held his Aforepublik concert. He repeated the feat with his 2021 ‘Made in Lagos’ tour, where he sold out under eight minutes. Davido’s first show at the arena was in 2018 while his second show was on March 5, 2022. Burna Boy also made history this year as he became the first African artiste to sell out the 20,000 capacity State Farm Arena in Atlanta. He is also the first Nigerian artiste to have sold out the 20,300 capacity Accor Arena in Paris, twice. These are few among other famed sold-out concerts by these artistes, and a host of other successful concerts held outside the country by other Nigerian artistes.

Nigerian music continues to chart its course through the global entertainment space, as famed music awards such as the Grammys and BET Awards have shown due recognition to Nigerian artistes by various nominations and awards.

In 2020, Burna Boy’s ‘African Giant’ album was nominated for Best World Music Album at the Grammy Awards. A year later, he went home with a Grammy for Best Global Music Album which he won with his ‘Twice as Tall’ album. Wizkid has also won a Grammy for his role in ‘Brown Skin Girl’, Beyonce’s 2019 hit song. His ‘Made in Lagos’ album and his collaborative work with Tems on ‘Essence’ (later remixed with Justin Bieber) has earned Wizkid other Grammy nominations.

Fela Anikulapo Kuti, the Afrobeat legend and son of Rev Josiah Ransome-Kuti (mentioned at the beginning of this article) has also had his legacy recognised by Grammy nominations through the works of his sons, Femi Kuti and Seun Kuti, and more recently, Made Kuti (Fela’s grandson). These mentions are just a handful of the numerous other awards and recognitions that Nigerian music stars have received at a global stage.

Back home in Lagos, where a good number of popular Nigerian artistes live or frequent, the city is a festival galore of Nigerian music every December. At that time of the year, Lagos comes alive with a line-up of music concerts and other social events, in what has been dubbed as ‘Detty December’. The activities and publicity surrounding Nigerian artistes and their concerts, and the attendant social media excitement around that period is a major thrust of what ‘Detty December’ appears to be about. Other Nigerians outside Lagos are also not oblivious of the international repute that Nigerian artistes have brought to Nigerian music. Even among the masses and school children, popular Nigerian music is a part of their everyday lives. Either as stickers on public buses, phone ringtones,  a new ‘street lingo’, an internet meme or the blaring music from loud speakers in public places; Nigerian music and the artistes behind them continue to rise.

There have been conversations about whether due credit have been given to the progenitors of Afrobeats, just as the late legend, Fela Anikulapo Kuti was synonymous and credited with Afrobeat (without s). While various documentaries have attempted to tell the story of the new sound of Nigerian music, there have been accusations of distortions to the original story that became Afrobeats.

However, speaking on the topic, Wale Ozolua stressed that the onus was upon such claimants to tell their story so as to be recognised.

He said, “If one does not tell his/her story, he/she cannot dispute what is told or documented by others. I will call on whoever feels he/she started the movement to own it by telling the world so that it can be properly documented and due credit given”.

When asked whether Afrobeats was stifling other genres, Ozolua responded by saying, “Yes. The focus on Afrobeats has restricted the consumption of other genres like Soukous, Makossa, Fuji etc and it will take the media and other industry stakeholders to stem this tide. For Audiomack, we have decided to classify African sounds under Afrosounds so there is a level playing field”.

It’s tough for female musicians to be successful in Nigeria