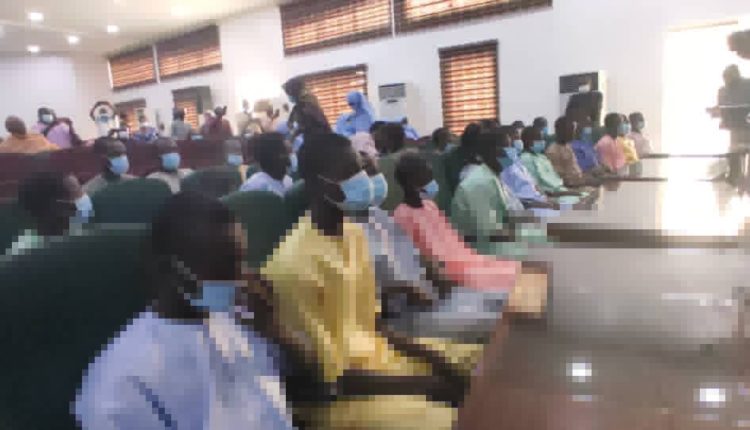 Thirty-eight (38) Students including staff and their relatives abducted from the Government Science College, Kagara have regained their freedom.

Addressing the kidnapped victims in a solemn mood, Governor Sani Bello thanked Allah for their safe return, and enjoined them to see their experience as one of the lessons of life and should not be discouraged in their educational pursuit.

He said it is a joint effort between the state government, security agents and traditional leaders as well as other relevant stakeholders.

The Governor said beyond the release, Government will put up a system to look at the root causes with the view to finding solutions.

The Governor also thanked the security agencies, Nigerlites and indeed Nigerians for their efforts and prayers while the abductees were in captivity.

Among the 38 released and received abductees, 24 are students, 6 staff and 8 staff relatives. However, one of the abductees is hospitalized due to excessive exhaustion.

The released victims arrived at the state capital earlier this morning and were taken to a government-owned facility for clean-up and medical examinations due to the state of their physical appearances.

The kidnapped victims will remain under medical examinations for a few days before they will be reunited with their families.

The released abductees were kidnapped on the  17th February, 2021 when bandits stormed the Government Science College, Kagara and abducted students, staff and relatives while a student, Benjamin Habila was shot dead at the school premises by the gunmen.

Meanwhile, President Muhammadu Buhari has welcomed the release of the abducted students of Government Science College, Kagara in a statement signed by his Senior Special Assistance on Media and Publicity, Garba Shehu.

The President who applauded the efforts of the Niger State Government and the nation’s security and intelligence agencies for their efforts in securing the release also sympathized with the kidnapped victims and their family members on their ordeals.

“We are happy they have been released”, President Buhari said.

Also, Mr. Augustine Aze, a Parent to an SS3 abducted student of Govt Science College Kagara, said he might have committed suicide if his son had died in the hands of his abductors.

He said since the 20-year-old boy was abducted alongside other victims of armed bandits in Kagara, that he had not only been crying, but had also not eating his food nor taking his bath, adding that he and every members of his family had embarked on fasting and prayers.

He said, “I didn’t know I was taking a very big risk for taking my son into the bush in Government Science College, Kagara , to stay in the boarding house, while I was living in the town. But on hearing about his release from the captives of the bandits, it was as if I was in heaven already with God because I have been overjoyed and elated at the thought of seeing my son alive again.”

“I am very happy that our Governor, Alhaji Abubakar Sani Bello has done this great help for us. I also thank God that I am seeing a wonderful day like this and I give God all the glory,” he concluded.