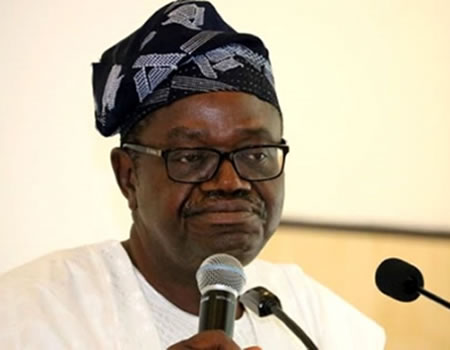 The Minister of State, Ministry of Niger Delta Affairs, Senator Omotayo Alasoadura, has lamented that having idle facilities unused is ungodly and wasteful, especially abandoned projects within the Niger Delta region.

The Minister disclosed this, in Akure, when he paid a courtesy visit to the Executive Governor of the State, Mr Oluwarotimi Odunayo Akeredolu, SAN, recently in Ondo State.

He said having idle facilities is ungodly and wasteful especially within the region, stressing that close to 12 thousand abandoned projects were credited to both the Niger Delta Development Commission (NDDC) and the Ministry of Niger Delta Affairs (MNDA) in Ondo State alone.

In his words “in the past, things were done with impunity, nobody wants to report anybody, you can get anything provided you know how to manipulate the system but now the Ministry is restoring sanity.”

He, therefore, commended the President for his support at ensuring that the Niger Delta is placed on a better pedestrian.

Senator Alasoadura also thanked the Governor of Ondo State for the great works he is doing in the State.

In his response, the Executive Governor of Ondo State thanked the Federal Government for appointing two prominent Nigerians from the region noting that combined together, ” there is nothing they can’t bulldoze and that having the Niger Delta Development Commission (NDDC) under the Ministry is a step in the right direction.”

“We don’t need new projects, the abandoned ones on ground should be completed,” he emphasised.

In addition, he stated that the government of the State is ready to cooperate fully with the Ministry to complete the abandoned projects.

Earlier, the Deji of Akure and Paramount Ruler of Akure Kingdom, His Imperial Majesty Obalade Toyinbo Ogunlade Aladelusi, thanked the President for appointing a son of the soil as a Cabinet Minister of the Federal Republic of Nigeria.

He expressed his dismay at the shabby jobs done at the renovation of the Ondo Town Hall, explaining that the interlocking blocks were not properly set, the roof leakages are appalling, amongst other things.

Responding to the Royal Highness, the Deputy Director, Housing and Urban Development, Mr Salas Bamai, apologised on behalf of the Ministry and stated that the project contractor will be sent back to correct the observations made on the job.

The Skills Acquisition Centre has been completed but has been lying fallow for years. The Minister opined that rather than letting it idle away, it could serve as a satellite campus for an institution of higher learning.